Turkish-backed option for Raqqa not off the table, US-led coalition commander says 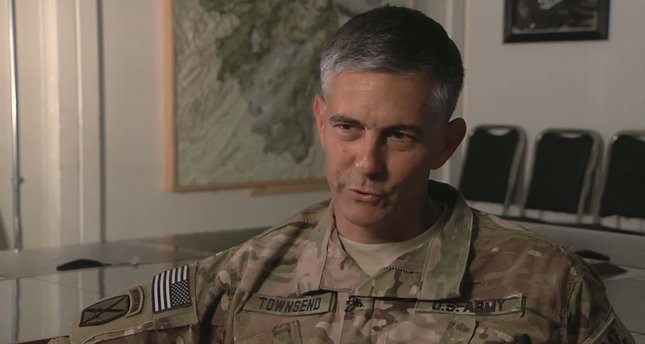 The U.S. Commander of the anti-Daesh coalition told reporters on Wednesday that military leaders are still discussing Turkey's participation in the Raqqa operation, and that a decision on whether to include YPG-led Syrian Democratic Forces (SDF) in the offensive hasn't been made yet.

"Right now, we're in the approach to isolation. Our Syrian Democratic Forces partners have not yet closed to a siege around Raqqa as of yet. They're still moving in that direction, so we've got some time yet to fully examine all the options. Nothing's off the table," Lieutenant General Stephen Townsend said, responding to a question on whether Turkey will participate in the Raqqa operation.

Several reports suggested that the U.S. Central Command (CENTCOM) believes the best way to capture Raqqa is utilizing YPG-led Syrian Democratic Forces. YPG troops in this alliance stand at around 25.000 Kurdish fighters and Arab forces are estimated to be about 20.000. Turkey considers Syrian-Kurdish militia the YPG as a terror group due to its extensive ties with the PKK, which has waged a terror campaign in Turkey for more than 30 years.

Turkish media reports suggest that Turkey can match this force with 5,000 soldiers in the special forces and 10,000 Free Syrian Army (FSA) troops. Various sources have also confirmed that the Pentagon found this offer insufficient.

General Townsend said the recent liberation of Al-Bab by Turkey and the FSA encouraged the coalition, but warned that all forces should remain focused on the counter-Daesh fight. The warning was a clear reference to Ankara's statements which declared that the Turkish-backed forces would be seizing SDF and YPG-held Manbij as their next move.

"The U.S., Turkey and coalition partners are working together to support stabilization and local civilian governance in Manbij. The coalition is committed to the security of Turkey and will continue to work in close coordination with partner forces and allies to deliver a lasting defeat to ISIS, which remains the greatest terrorist threat to the region and the world," he said, using an alternative acronym for Daesh.

The Pentagon on Monday submitted its review on the anti-Daesh fight that was requested by President Donald Trump. The review is essential for the Raqqa operation since it presents a set of military options, as well as diplomatic and financial measures, to rapidly defeat Daesh.
Last Update: Mar 02, 2017 9:56 am
RELATED TOPICS