58 dead, 'dozens' wounded in suspected US airstrike on Aleppo mosque 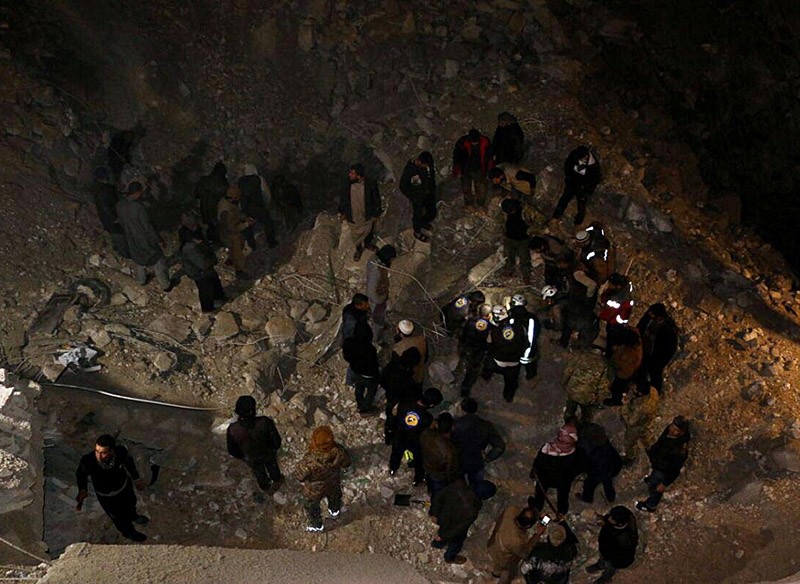 The US military says it carried out an air strike in northern Syria against an Al-Qaeda target, but denies deliberately targeting a mosque where at least 42 people were killed according to an independent monitor.

The US-led coalition has been bombing terrorist groups in war-torn Syria for several years, with hundreds of civilians unintentionally killed in the country and in neighboring Iraq.

"We did not target a mosque, but the building that we did target -- which was where the meeting took place -- is about 50 feet (15 meters) from a mosque that is still standing," said Colonel John J. Thomas, spokesman for US Central Command.

According to a Centcom statement: "U.S. forces conducted an airstrike on an Al-Qaeda in Syria meeting location March 16 in Idlib, Syria, killing several terrorists."

The Centcom spokesman later clarified that the precise location of the strike was unclear -- but that it was the same one widely reported to have targeted the village mosque in Al-Jineh, in Aleppo province.

"We are going to look into any allegations of civilian casualties in relation to this strike," he added, when asked about reports from the Syrian Observatory for Human Rights that 42 people had died in the attack on the village mosque, most of them civilians.

The head of the Britain-based Observatory Rami Abdel Rahman said "the raids by unidentified warplanes targeted a mosque in Aleppo province during evening prayers, killing 42 people, most of them civilians".

"More than 100 people were wounded," he said, adding that many were still trapped under the collapsed mosque in the village of Al-Jineh, just over 30 kilometers (20 miles) west of Aleppo.

The village is held by opposition and other groups, but no terrorist factions are present.

Turkish Deputy Prime Minister Numan Kurtulmuş on Friday condemned the bombing of a mosque in northern Syria as a "war crime." "This is a crime against humanity, this is a war crime," Kurtulmuş told reporters in the northwestern province of Çanakkale. "Bombing civilians, people in the mosque, and a house of worship is unacceptable."

Mehmet Görmez, head of Turkey's Presidency of Religious Affairs, extended his condolences for the families of those who were killed in the attack, in addition to the people of Aleppo and all Muslim world.

Body parts in the debris

Rescue workers struggled to pull survivors from rubble, and dozens of residents were still unaccounted for, the Observatory said.

Abu Muhammed, a village resident, told AFP that he "heard powerful explosions when the mosque was hit. It was right after the prayer at a time when there is usually religious lessons for men in it".

"I saw 15 bodies and lots of body parts in the debris when I arrived. We couldn't even recognize some of the bodies," he added.

An AFP reporter at the scene said rescuers earlier left the wreckage site but were forced to double back when they heard moaning coming from the debris.

Footage published by Halab Today, an online media group focused on news in Aleppo, showed piles of rubble where the mosque allegedly stood.

More than 320,000 people have been killed in Syria since the conflict began six years ago with anti-government protests.

A cessation of hostilities was brokered by opposition-backer Turkey and regime ally Russia in December, but violence has continued across much of the country.

The Observatory, which relies on a network of sources inside Syria for its information, says it determines whose planes carry out raids according to type, location, flight patterns and munitions used.

But the skies over Aleppo province are busy, with Syrian regime and Russian warplanes as well as US-led coalition aircraft carrying out air strikes.

Russia began a military intervention in Syria in September 2015, and in the past has dismissed allegations of civilian deaths in its strikes.

The US-led coalition, meanwhile, has been bombing terrorist groups in Syria since 2014.

The US-led coalition fighting the Daesh group said earlier this month that its raids in Iraq and Syria had unintentionally killed at least 220 civilians since 2014.

Critics say the real number is much higher.