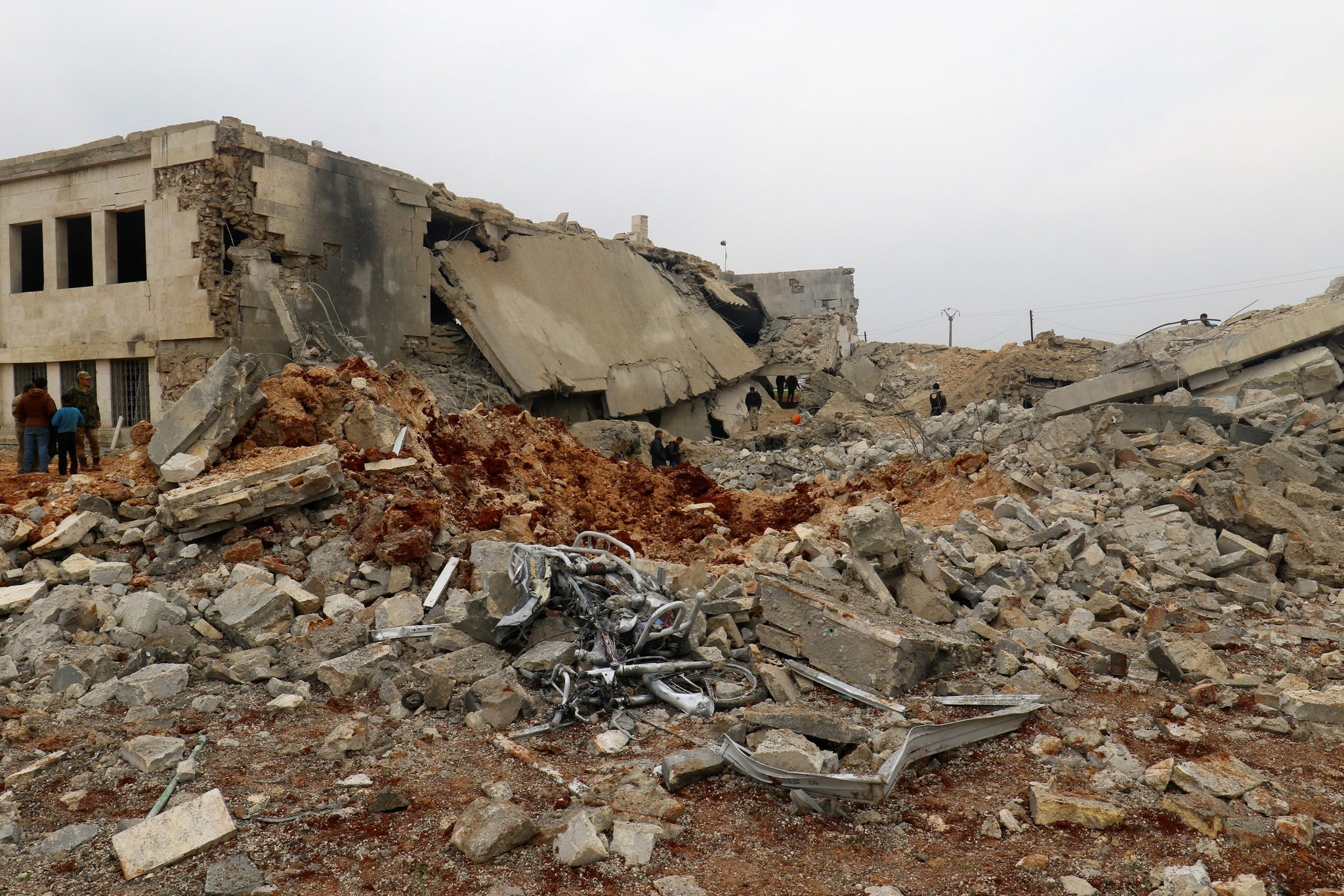 Civil defense members and people inspect a damaged mosque after an airstrike on the village of al-Jina, Aleppo province in northwest Syria March 17, 2017. (REUTERS Photo)
by Associated Press Mar 17, 2017 12:00 am

The United States struck an al-Qaida gathering in northern Syria killing several "terrorists," and is investigating the number of civilians killed, a U.S. official said Friday amid reports that some 58 people, mostly civilians, were killed in a mosque in the area because of the same airstrike.

Friday prayers were cancelled across opposition-held parts of northern Syria after an airstrike that opposition activists and paramedics said struck the crowded Omar Ibn al-Khattab Mosque in the Jeeneh district in Aleppo province, killing and wounding dozens of people, some of whom were left trapped under the rubble.

U.S. Army Maj. Josh Jacques, a U.S. Central Command spokesman, said the U.S. did not target or strike a mosque.

"We targeted an al-Qaeda gathering across the street from a mosque. The mosque does not appear to be damaged following the strike," he said, adding: "We are aware of the reports of civilian casualties and we are looking into it."

In a statement issued Thursday, the U.S. Central Command based in Tampa, Florida, said it had carried out an airstrike on an al-Qaida "meeting location," killing "several terrorists." It said in a statement that neighboring Idlib province has been a significant safe haven for al-Qaida in recent years. The statement recalled an airstrike in January that it said destroyed an al-Qaida training camp where more than 100 fighters were being trained in terror tactics.

A powerful Syrian opposition group and other opposition activists blamed the U.S.-led coalition for the airstrike. The coalition has been targeting Daesh and al-Qaida's affiliate in northern Syria for more than two years, but it was not clear how the opposition group knew who was behind the attack. Russian and Syrian aircraft are known also to operate in the opposition-held region.

Bahaa al-Halaby, an Aleppo-based opposition activist based, said the Thursday night airstrike hit as about 250 people had gathered at the mosque for prayers or to attend a religious lesson. Mosques are usually crowded on Thursday night ahead of Friday, the day of communal prayers in the Muslim weekend.

"This was one of the worst massacres committed in the area," al-Halaby said.

An Islamic networking group as Advocacy and Intimation is known to be active at the mosque where religious lessons are offered to the local population, according to al-Halaby and the Britain-based Syrian Observatory for Human Rights, which also described the attack as a "massacre."

Footage from the scene showed volunteers putting out fires and pulling victims from the rubble.

The Observatory and al-Halaby said Friday prayers were cancelled in opposition-held parts of Aleppo and Idlib provinces, adding that such decisions are not uncommon where mosques have been targeted in the past.

The Observatory said the airstrike on the mosque in Jeeneh killed 46 while the Local Coordination Committees, another monitoring group, said 40 were killed. Such discrepancies are not uncommon in the immediate aftermath of attacks in Syria.

The powerful opposition group Ahrar al-Sham also said the airstrike was carried out by the U.S.-led coalition, adding that "the targeting mosques and places of worship is a war crime."