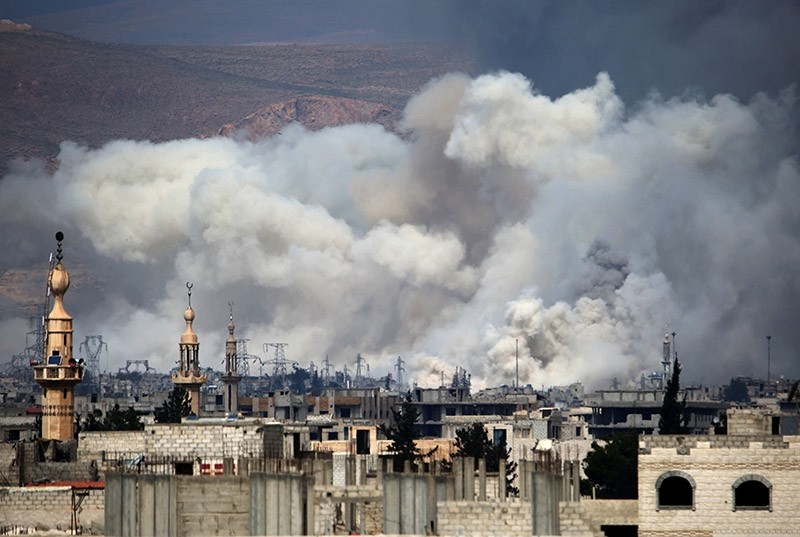 Heavy clashes rocked eastern districts of the Syrian capital on Sunday as groups linked to a former al-Qaeda affiliate tried to fight their way into the city center in a surprise assault on regime forces.

The attack on Damascus comes just days before a fresh round of UN-brokered peace talks in Geneva aiming to put an end to Syria's six-year war.

Opposition and regime troops agreed to a nationwide cessation of hostilities in December, but fighting has continued across much of the country, including in the capital. The deal brokered by Russia, Turkey and Iran, however, excludes former Al-Qaeda affiliate Fateh al-Sham Front and Daesh.

Steady shelling and sniper fire could be heard across Damascus on Sunday as rebel factions allied with Fateh al-Sham Front launched an attack on regime positions in the city's east.

Rebels then advanced into the nearby Abbasid Square area, seizing several buildings and firing a barrage of rockets into multiple Damascus neighborhoods, Abdel Rahman said.

Regime forces responded with nearly a dozen air strikes on Jobar, he added.

Syrian state television reported that the army was "thwarting an attack by terrorists" with artillery fire and had ordered residents to stay inside.

It aired footage from Abbasid Square, typically buzzing with activity but now empty except for the sound of shelling.

AFP correspondents in Damascus said army units had sealed off the routes into the square, where a thick column of smoke was rising into the cloudy sky.

Several schools announced they would close through Monday, and many civilians cowered inside in fear of stray bullets and shelling.

'From defensive to offensive'

Control of Jobar -- which has been a battleground for more than two years -- is divided between opposition groups, including extremist factions, and regime forces.

According to the Observatory, the Faylaq al-Rahman rebel group and the Fateh al-Sham Front -- known as Al-Nusra Front before it broke ties with Al-Qaeda -- are present in Jobar.

Regime forces have long sought to push the rebels out of the district because of its proximity to the city center in Damascus.

But with Sunday's attack, Abdel Rahman said, "rebels have shifted from a defensive position in Jobar into an offensive one".

"These are not intermittent clashes -- these are ongoing attempts to advance," he said.

The Observatory said rebels had launched the attack as a way to relieve allied fighters in the nearby districts of Barzeh, Tishreen and Qabun from government attacks.

"Nine regime forces and at least 12 rebels were killed" in those districts over the last 24 hours, the Observatory said.

A rebel commander told Reuters the assault on the army's last line of defense of the city's residential areas was aimed at relieving pressure on rebels who have lost ground in Qaboun and Barza, north of Jobar.

"This is to relieve the pressure on rebels with the regime not stopping its bombardment and artillery shelling," Abu Abdo, a commander from Failaq al Rahman said via internet messaging, adding that the rebels had seized several buildings that overlooked the Abbasid Square.

Rebels said the army had advanced in the last two days after weeks of bombardment and aerial strikes aimed at regaining control of strategic areas inside the capital a few kms away from President Bashar al Assad's seat of power.

The army had advanced towards a road between Qaboun and Barza whose capture severed the links between the two besieged opposition districts where tens of thousands of people live.

"Taking this road would isolate Barza and Qaboun completely and with a security belt around it," said Abu Abdullah, another fighter with Failaq al Rahman rebel group.

The regime army and its militias have been targeting the besieged Eastern Ghouta, the biggest remaining opposition bastion around the capital, for months, making incremental gains. It has undertaken a relentless bombing campaign of residential areas to force rebels to surrender and agree to deals that push them out of these areas.

More than 320,000 people have been killed since Syria's conflict erupted six years ago with protests against Assad's rule.

After a regime crackdown, the uprising turned into an all-out war that has drawn in world powers on nearly all sides.

Syria's army said it shot down an Israeli jet and hit another as they were carrying out early morning strikes near the famed desert city of Palmyra.

Israel denied any planes were hit and said it was targeting weapons bound for Lebanon's Hezbollah movement, which is backing Assad in Syria.

The United Nations has sponsored peace talks to end the conflict since 2012, to no avail.

Regime representatives and opposition figures are set to meet for a fourth round of negotiations on March 23 in Switzerland.