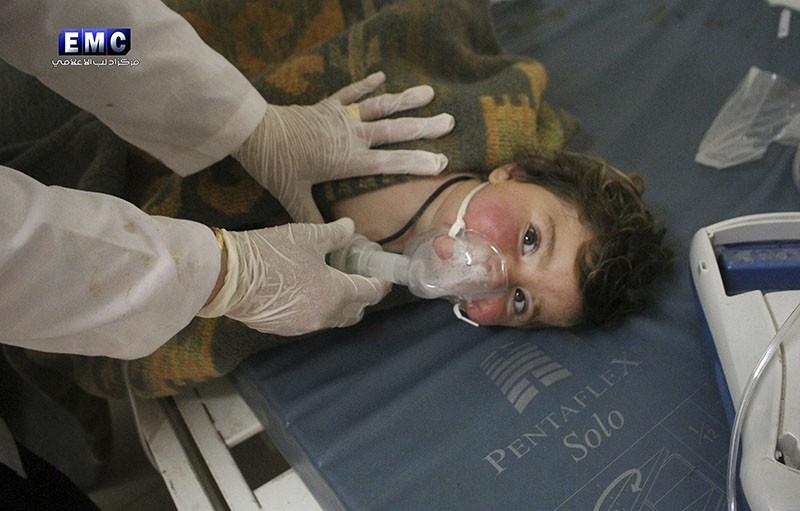 Victims of a suspected chemical attack in Syria appeared to show symptoms consistent with reaction to a nerve agent, the World Health Organization said on Wednesday.

"Some cases appear to show additional signs consistent with exposure to organophosphorus chemicals, a category of chemicals that includes nerve agents," WHO said in a statement, putting the death toll at least 70.

"The images and reports coming from Idlib today leave me shocked, saddened and outraged," Peter Salama, head of WHO's health emergencies program, said in a statement.

"These types of weapons are banned by international law because they represent an intolerable barbarism," he added.

The United States has said the deaths were caused by sarin nerve gas dropped by Syrian aircraft. Russia has said it believes poison gas had leaked from a rebel chemical weapons depot struck by Syrian bombs.

Sarin is an organophosporus compound and a nerve agent. Chlorine and mustard gas, which are also believed to have been used in the past in Syria, are not.

A Russian Defense Ministry spokesman did not say what agent was used in the attack but said the rebels had used the same chemical weapons in Aleppo last year.

The WHO said it was likely that some kind of chemical was used in the attack because sufferers had no apparent external injuries and died from a rapid onset of similar symptoms, including acute respiratory distress.

WHO warned that the capacity of hospitals in the surrounding area was limited and that many facilities had been damaged in the fighting.

The UN agency pointed out that the Ma'ara Hospital had been out of service since Sunday due to infrastructure damage, and that the Al Rahma Hospital was hit shortly after it began taking in patients from the suspected chemical attack and was forced to temporarily shut its doors.

Emergency rooms in the area were overwhelmed, and many patients had been referred to southern Turkey, it said.

It said its experts in Turkey were giving guidance to overwhelmed health workers in Idlib on the diagnosis and treatment of patients, and medicines such as Atropine, an antidote for some types of chemical exposure, and steroids for symptomatic treatment had been sent.

A U.N. Commission of Inquiry into human rights in Syria has previously said forces loyal to Bashar al-Assad have used lethal chlorine gas on multiple occasions.

Hundreds of civilians died in a sarin gas attack in Ghouta on the outskirts of Damascus in August 2013. Assad's government has always denied responsibility for that attack.

Syria agreed to destroy its chemical weapons in 2013 under a deal brokered by Moscow and Washington. But Russia, a Syrian ally, and China have repeatedly vetoed any United Nations move to sanction Assad or refer the situation in Syria to the International Criminal Court.