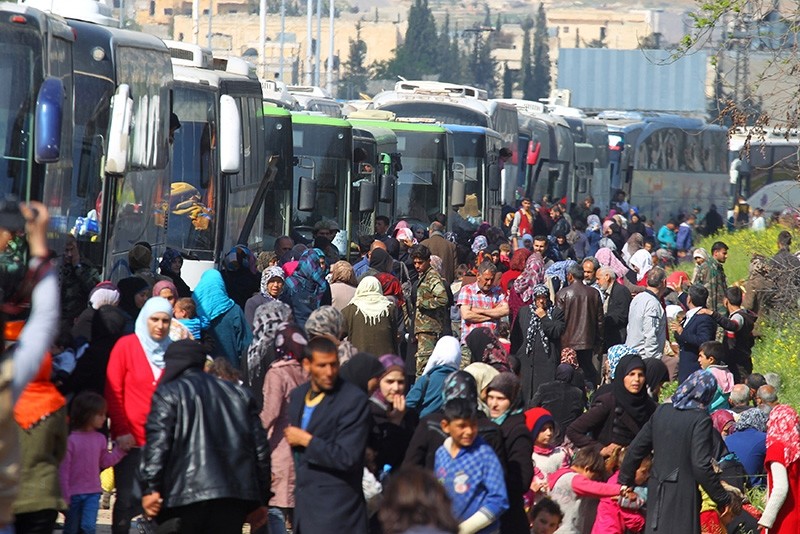 People that were evacuated from the two villages of Kefraya and al-Foua walk near buses, after a stall in an agreement between opposition and regime, at opposition-held al-Rashideen, Aleppo province, Syria, April 15, 2017. (Reuters Photo)
by Compiled from Wire Services Apr 15, 2017 12:00 am

The Syrian Observatory for Human Rights said that 98 evacuees from the northern towns of Fuaa and Kafraya were killed when an explosives-laden vehicle hit their buses at a transit point west of Aleppo on Saturday.

The dead included 109 evacuees, 13 of whom were women, from the villages of Foua and Kefraya in the north-western province of Idlib, the Syrian Observatory for Human Rights said.

The other fatalities were escorts and fighters, who were on the site of the bombing outside the northern city of Aleppo, according to the Britain-based watchdog.

The toll is expected to rise because there are still critically injured and missing people after the blast, the Observatory said.

The blast hit the Rashidin area on Aleppo's outskirts, where dozens of buses carrying mostly Shiiite residents of two villages al-Foua and Kefraya that are being evacuated in a deal between warring sides were waiting to enter the city.

The state TV channel said the explosion was caused by a car bomb. State TV showed horrific images of bodies strewn on the ground and near buses.

A senior opposition official said 20 fighters who guarded the buses were killed as well as dozens of passengers. He spoke on the condition of anonymity because he is not authorized to speak to the media.

A military media unit run by Damascus ally Hezbollah said a suicide attacker had detonated a car bomb near the convoy.

Pictures posted on state media showed what appeared to be the aftermath of the explosion, with bodies lying on the ground and fires belching out thick black plumes of smoke. Buses were blackened by the blast with their windows blown out.

Thousands of Syrians were stuck in and around Aleppo on Saturday as a deal to evacuate people from two Shiite villages in return for Sunni opposition fighters and their families leaving two besieged towns near Damascus halted, a war monitor and activists said.

The British-based Syrian Observatory for Human Rights (SOHR) said the delay was because opposition groups from Zabadani, one of the towns included in the deal, had not yet been granted safe passage out.

The agreement is one of several concluded in recent months that has seen Bashar al-Assad's regime take back control of areas long besieged by his forces and their allies.

In the latest deal, hundreds of rebels and their families evacuated the town of Madaya near Damascus, and were taken to the regime-held city of Aleppo. From there they will travel to Idlib province, an opposition stronghold.

In return, pro-regime fighters and residents from the Shiite villages of al-Foua and Kefraya, both surrounded by Idlib opposition fighters, have left the area and reached Aleppo's outskirts.

On Saturday, those from Madaya sat outside rows of coaches in a bus garage in government-held Aleppo, waiting to move onto Idlib, pictures sent by a pro-opposition activist showed.

Meanwhile residents from the Shiite villages were still waiting in insurgent territory on Aleppo's outskirts to cross into the city, the Observatory and a witness said.

The pro-opposition activist said opposition fighters were saying that a smaller number of pro-regime fighters had left the Shiite villages than was agreed.

A Madaya resident, speaking from the bus garage in Aleppo, said people had been waiting there since late on Friday night, and were not being allowed to leave.

"There's no drinking water or food. The bus garage is small so there's not much space to move around," Ahmed, 24, said.

"We're sad and angry about what has happened," he said. Many people felt that they had been forced to leave, he said.

"There was no other choice in the end - we were besieged inside a small area in Madaya."

Syria's opposition says the evacuation deals, which have included areas of Aleppo and a district in the western city of Homs, amount to forced displacement of Assad's opponents from Syria's main urban centers.

The agreements are also causing demographic changes, they say, because those who are displaced are mostly Sunni Muslims.

Syria's population is mostly Sunni. Assad is from the Alawite religious minority, often considered an offshoot of Shiite Islam.

He has been backed militarily by Russia, and by Shiite fighters from Iran and the Lebanese Hezbollah group in Syria's six-year-old conflict.

Assad holds the military advantage over the opposition in the west of the country thanks to Russia's intervention in 2015, although the insurgents continue to fight back and have made gains in some areas.