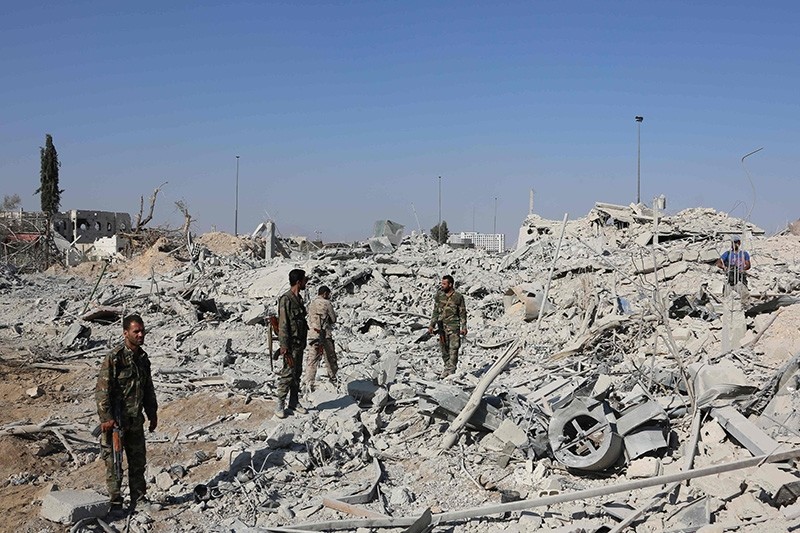 Assad regime forces stand on the rubble of destroyed buildings as they advance through Qabun district, on the outskirts of the capital Damascus, on May 13, 2017 (AFP Photo)
by May 14, 2017 12:00 am

Civilians and the opposition began evacuating a third opposition-held district of Damascus on Sunday, bringing the Assad regime closer to cementing its control over the Syrian capital.

An AFP correspondent inside Qabun saw around 10 buses carrying out residents and fighters in the morning, after a deal for the neighbourhood was announced late Saturday following heavy fighting.

The agreement mirrors those implemented earlier this week in the nearby opposition-held districts of Barzeh and Tishrin.

State media announced the evacuation had started, and an activist inside the remaining opposition-held part of the district earlier confirmed preparations for the operation were underway.

"The buses are being prepared, they are waiting in the areas controlled by the regime," Odai Awdeh told AFP.

"The names of those who want to leave, whether civilians or fighters, are being registered," he added.

The evacuation deal came on Saturday night after government forces advanced inside the neighbourhood.

The deals for Qabun, Barzeh and Tishrin neighbourhoods follow a pattern of agreements under which the opposition agree to surrender in exchange for safe passage to opposition-held territory elsewhere.

The regime says the deals are the best way to end the six-year war, but the opposition says it is forced into the agreements by regime bombardment and siege.

Two groups of evacuees left Barzeh neighbourhood this week, with one leaving from Tishrin.

All three headed to Idlib province, in northwest Syria.

The negotiations on evacuating Qabun had stalled earlier this week over demands that some rebels be allowed to head to Eastern Ghouta, opposition-held territory outside Damascus.

But the National Defence Forces source and the Syrian Observatory for Human Rights monitor said the final agreement only allowed evacuees passage to Idlib.

Damascus has been insulated from some of the worst violence of Syria's war, which has killed over 320,000 people since it began with anti-Assad regime protests in March 2011.

But the regime has made securing control of the last remaining opposition districts in the capital a key priority.