US accuses Assad of mass executions, using 'crematorium' to hide killings in Syria 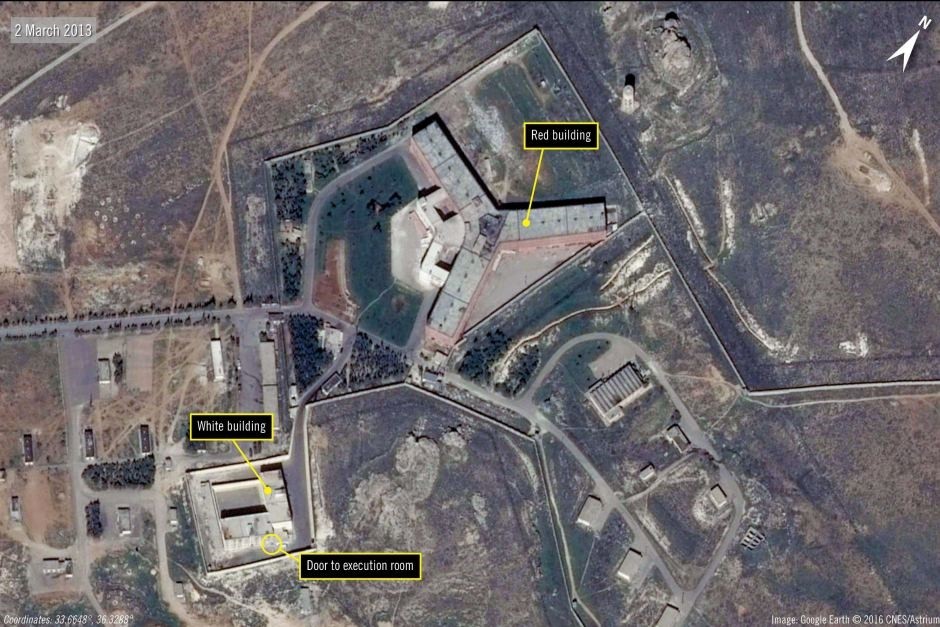 Amnesty said the deaths occurred at the Saydnaya prison complex, north of Damascus. (Photo courtesy of Amnesty International)
by Compiled from Wire Services May 15, 2017 12:00 am

The Trump administration is accusing the Syrian regime of carrying out mass killings of thousands of prisoners and burning the dead bodies in a large crematorium outside the capital.

The State Department says about 50 detainees a day are being hanged at Saydnaya (Said-nay-ah) military prison, about 45 minutes from Damascus. It says the crematorium is being used to hide evidence of the extent of the killings.

The department is releasing newly declassified photographs showing what it says is a building in the prison complex that has been modified to support the crematorium.

In presenting the photographs, the top U.S. diplomat for the Middle East, Stu Jones, said Monday that Bashar Assad's regime "has sunk to a new level of depravity" with the support of Russia and Iran.

"Credible sources have believed that many of the bodies have been disposed in mass graves," Jones told reporters at a briefing.

"We now believe that the Syrian regime has installed a crematorium in the Sednaya prison complex which could dispose of detainees' remains with little evidence," he said.

The United States believes the crematorium would be used to cover up mass murders at the prison and will present the evidence to the international community, Jones said.

Amnesty International reported in February that an average of 20 to 50 people were hanged each week at the Sednaya military prison north of Damascus. Between 5,000 and 13,000 people were executed at Sednaya in the four years since a popular uprising descended into war, it said.

Jones also was not optimistic about a deal to set up "de-escalation zones" inside Syria in an attempt to reduce violence and save lives. The deal was brokered by Russia with support from Iran and Turkey during ceasefire talks in the Kazakh capital of Astana last week.

"In light of the failures of the past ceasefire agreements, we have reason to be skeptical," Jones said. "The (Assad) regime must stop all attacks on civilian and opposition forces. And Russia must bear responsibility to ensure regime compliance.