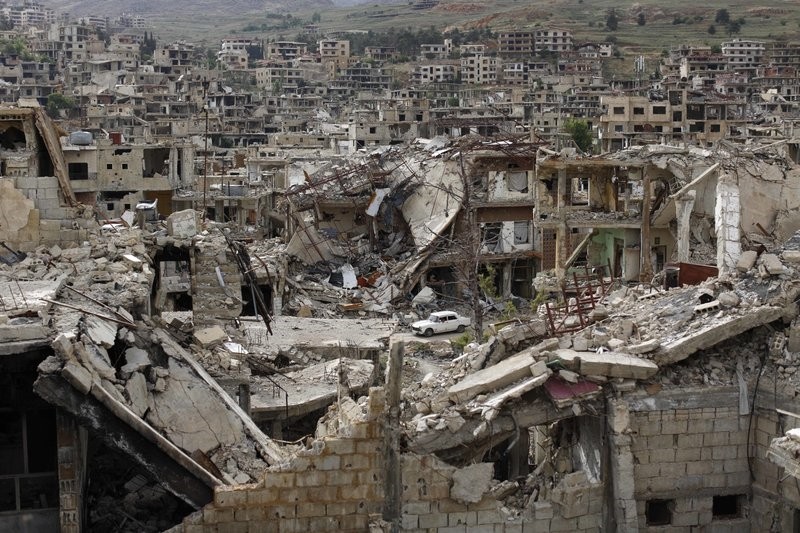 Arriving with her husband and 10-year-old daughter to check on their home for the first time in five years, Adibeh Ghosn had trouble recognizing the neighborhood.

In disbelief, she walked over the mounds of rubble leading to her home. "Where are the neighbors, where are the people? What has happened here?" she cried, wiping away tears as she gazed at the horizon of collapsed buildings, houses stripped of doors and windows, and finally her own charred home.

Once a popular summer resort famed for its fruit trees and favored by tourists from rich Gulf Arab countries, the Damascus suburb of Zabadani is now a deserted endless vista of pulverized buildings after thousands of rebels were driven out, along with the town's original inhabitants.

A short drive away is Madaya, once a besieged rebel stronghold that captured international headlines for haunting photographs of children dying of malnutrition. Like Zabadani, it has now been retaken by Syrian troops.

This week, The Associated Press entered the twin towns, witnessing first-hand the enormous scale of the human catastrophe resulting from five years of grueling bombardment and siege.

"Our town used to be a paradise. We were living in bliss. Why did this happen to us?" Ghosn said.

Zabadani, some 30 miles (45 kilometers) northwest of Damascus, was retaken last month by Syrian and Iranian-backed allied forces following two years of siege, the latest in a growing list of towns and cities recaptured by forces loyal to Bashar Assad. The military gains have given the regime the upper hand in the 6-year-old war, creating new realities on the ground as fruitless rounds of cease-fire talks are held in Switzerland and Kazakhstan between the warring sides.

The predominantly Sunni town near the border with Lebanon returned to government control on April 19, following a Qatar- and Iran-brokered deal that saw thousands of rebels along with the remaining inhabitants of both Zabadani and nearby Madaya evacuated to rebel-held northern Idlib province in return for surrender. The elaborate deal was tied to the fate of thousands of Shiite inhabitants of two towns besieged by rebels in Idlib, who were relocated to regime-held territory as part of the agreement.

It was one of the largest and most controversial population transfers in Syria's civil war, underscoring Iran's growing role as a power broker in Syria as well as suspicions that the regional Shiite powerhouse was engaged in demographic and sectarian engineering in parts of Syria key to its own interests.

Driving through the fertile plains leading to Zabadani and Madaya, where fragrant cherry trees and apple orchards in full bloom lined the road, it was difficult to imagine that until recently people were dying of hunger and starvation here. Residents told the AP that some 50 people died of malnutrition in Madaya, where the population had swelled to 40,000 as many of those fleeing Zabadani had settled there.

Zabadani was the first town in the Damascus countryside to fall to the Syrian rebels in early 2012 and is among the hardest hit. The town was briefly retaken by government forces a month later before the rebels seized it again. For months, airstrikes and lethal barrel bombs rained down on the town wedged between blue-green mountains. In the summer of 2015, it came under total siege after the Assad forces cut the road to Damascus and allied Hezbollah militants encircled it from the Lebanese side.

Now, picking through the heaps of trash littering what used to be her home, Ghosn found a few family mementos that triggered more tears: a passport photograph of her son, now studying to be an architect. Her older daughter's school certificate, a crocheted table cloth made by her mother and the broken photo frame that held her wedding picture, the photo itself missing.

"Mama, who is this?" asked her youngest daughter Samar, pulling out a dusty photo from the mess.

"This is your baba (father) when he was young," said Ghosn, her words bringing squeals of laughter from the girl.

Samar was only 3 when the war started in March 2011 and was too young to remember the hardships her family endured before they fled Zabadani in early 2013 amid heavy fighting. They stayed for a year in the nearby town of Bloudan then went on to Jaramana, a district on the edge of Damascus. The girl has no memory of the family home.

"I wish I didn't come to see this. My heart aches," Ghosn murmured.

The town itself looked like an earthquake zone — rows of bombed-out buildings with their top floors collapsed and storefronts shattered. The streets were strewn with metal, stones and shards of broken glass. There was an eerie silence, broken only by the occasional sound of chirping birds or of glass crunching under foot as someone approached. In a town square, a lone government bulldozer worked at clearing the rubble.

Even the crops were gone — only the trunks of fruit trees that once filled the town's outskirts remained. Opposition activists said their foliage was cut down by pro-Assad militants in an effort to tighten the siege.

On a hilly street hidden from view, Hani Mikhail Ghorz worked with his older brother to clear the rubble from their home. The building had been bombed, their furniture stolen — even the doors were ripped out.

Shiite insignia on the walls indicated Hezbollah fighters had stayed there at some point.

"Despite how it looks, I feel happy here. I feel at peace. I have moved five homes in the past seven years and never once felt at home," the 36-year-old Ghorz said.

Zabadani is estimated to be 80 percent destroyed and will require a massive reconstruction effort to rise up again.

Hundreds of buildings appear structurally unfit for residence. There is no water or electricity. During the AP visit, only a few people were seen trickling back to check on their homes, most of them Christians who made up about 20 percent of the town's pre-war population of 20,000.

Three miles away, Madaya is relatively intact in comparison. However, here the hunger was much worse. One resident pointed to a parked car and said its owner sold it in return for five kilograms (11 pounds) of rice. Residents chopped up their beds, cupboards, even their ceilings to use the wood to keep warm.

Darwish Youssef said his family "didn't see bread" for six months. Pointing to his grandson, Bassel, he said it was a miracle he survived.

"This boy was 5 months old and we couldn't find baby milk for him," the 64-year-old Youssef said, adding that he survived on corn flour boiled in water and a small cup of cooked rice per day for months.

Back in Zabadani, on a shattered street in the old quarter of the city, two middle-aged men sat on battered arm chairs in front of destroyed shops, the wind blowing dust their way. One clutched a white-covered book. "It is an old family album. Look, there's my wife with my daughter when she was a baby," he said, flipping through the pages.

The pair had long ago left behind their homes and shops, but returned to Zabadani every day for the past week, just because they can.

"We live with our memories now. It's all we have left," the man said.