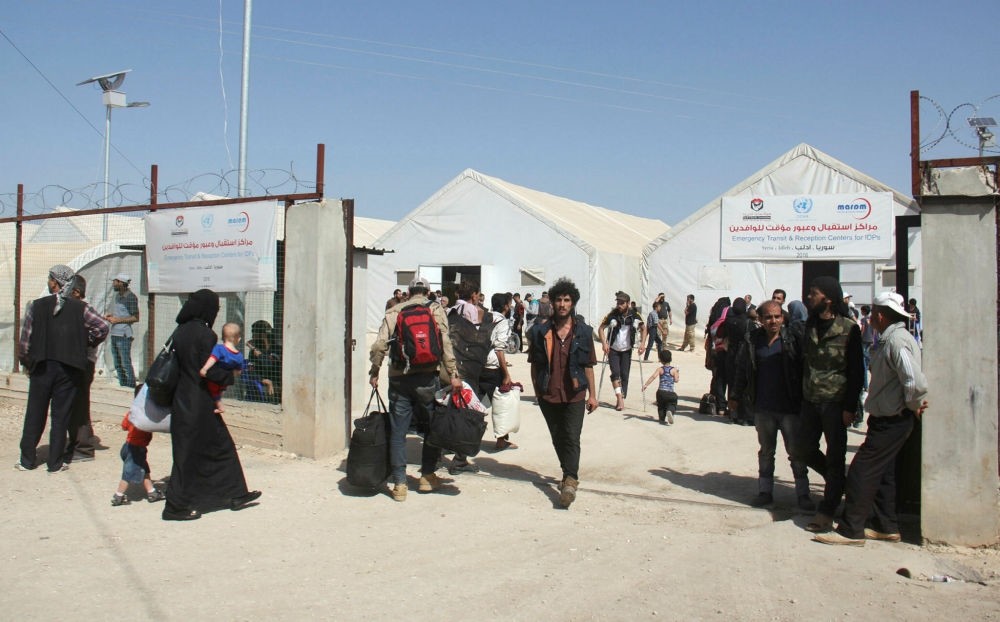 Syrian civilians who were evacuated from the Qabun district in northeast Damascus, arrive at a temporary camp in the northern countryside of Idlib province on May 15.
by Yusuf Selman İnanç Jun 03, 2017 12:00 am

Idlib and its dense population of at least 1 million people suffer from shortages and face intra-opposition conflict, which could lead to more bloodshed and civilian deaths

Opposition fighters felt close to victory in Aleppo after pushing regime forces south in a bid to seize the whole city. However, Russia's aerial and Iran's ground support and alleged disputes between opposition groups have changed the game. Turkey has staunchly opposed the Syrian regime since the peaceful revolution in the country turned into a bloody civil war after the regime started brutally attacking unarmed protesters, starting in the middle of 2011. The regime and Iran-backed militias seized Aleppo from rebel groups in a major blow to the opposition. Since then, dozens of opposition groups, including Ahrar al-Sham and al-Qaida-linked Tahrir al-Sham, have been squeezed into Idlib and its at least 1 million civilians. Thanks to Turkey's efforts during the Astana meeting, and since the regime suffers from a lack of manpower and is busy with consolidating its power to the south, the city has not witnessed a big battle. However, since the fall of Aleppo last November, hundreds of people have died in airstrikes and chemical attacks triggered by a U.S. military operation.

Despite the relatively calm atmosphere, the humanitarian situation continues to worsen with people suffering from food, water and energy shortages. Due to internal migration from southern parts of the war-torn country and mainly Aleppo, the city is densely populated and rents are very competitive. As a result, many people live in tents, mud houses and on the streets. Turkey has built many camps along the border, yet the increase of displaced people is uncontrollable. There are almost no schools or other education services for children, as people's ultimate goal is to survive. While Turkey provides ambulance service for the sick and wounded, there are very few hospitals in the city, as airstrikes have often hit health facilities. A report, recently released by the Union of Medical Care and Relief Organizations (UOSSM) and Physicians Across Continents (PAC), revealed that the regime is increasingly targeting hospitals. According to the report: "The first two surveys were completed in April 2015 and October 2015, when 113 hospitals were accessed. In the current December 2016 study, 107 hospitals (63 in the northern region and 44 in the southern region) were accessed out of 130 hospitals documented in the two regions." It concluded that hospitals and medical clinics in the country must be fortified to withstand airstrikes. Turkey still has an open-door policy, but measures have been tightened to prevent militant infiltration.

Besides regime and Russian attacks, people also suffer from intra-opposition conflicts. Dozens of groups have imposed control over certain parts of the densely populated and highly impoverished city. Tahrir al-Sham is the most organized and powerful group. Besides the conflicts and intermittent clashes among these groups, al-Qaida aims to form a new group, disavowing Tahrir al-Sham. "According to sources, al-Qaida's central leadership outside Syria no longer considers Tahrir al-Sham as its official affiliate for two reasons: because, according to al-Qaida's standards, Tahrir al-Sham has accepted insufficient levels of purity in its structure, rhetoric, vision and practice and because its core leadership has allegedly violated its oath of religious loyalty to al-Qaida leader Ayman al-Zawahiri," Charles Lister, a senior fellow at Washington-based Middle East Institute, wrote last month. He further said the group's power was declining due to internal divisions. Emphasizing the consequences of the division and intra-opposition conflict, Mehmet Emin Cengiz, an assistant researcher at al-Sharq Forum wrote for Middle East Monitor last month: "One of the biggest reasons for the fall of Aleppo was the lack of unity between opposition groups on the battlefield. Jabhat Fatah al-Sham (previous name of Tahrir al-Sham) was aware of the situation, it claiming that moderate groups sold the revolution to the enemies during the negotiations."

Al-Qaida's presence in Idlib also angers Russia and the U.S., which aims to clear Syria from all terrorist groups, excluding the PKK-linked Democratic Union Party (PYD). Having known that al-Qaida's presence de-legitimizes other opposition factions, PYD has declared it would like its People's Protection Units (YPG) militia to reach Idlib after taking Raqqa from Daesh. Certainly, Turkey believes Idlib is in its periphery and that it is able to make military maneuver in the city. Ankara has said it will not allow the YPG to make a move for Idlib. Russia would also put obstacles up against the U.S. if Washington encourages the YPG to fight the opposition groups in Idlib under the pretext of fighting al-Qaida. Yet the current situation may not be sustainable, as the city may face one of the bloodiest battles in the six-year civil war should the regime along with Iranian-backed militias and Russian air support move to take the city while the U.S. continues to use YPG as a proxy. The ultimate victim of such a multi-faceted battle would undoubtedly be the civilians.