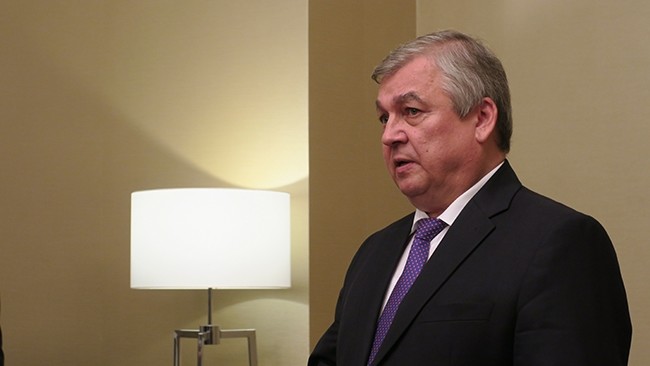 Russia could deploy its military to the de-escalation zones in Syria that are currently being discussed with Turkey and Iran, Russian negotiator Alexander Lavrentyev said Tuesday.

Moscow hopes to sign the final documents with Ankara and Tehran on Wednesday, he told reporters after a series of meetings in the Kazakh capital, Astana.

Russia and Iran, which back Assad regime, and Turkey, which supports some of opposition groups, agreed in principle to create four "de-escalation zones" in Syria in a previous round of talks in May, but put off a planned June meeting where they were supposed to work out the details.

Lavrentyev told reporters that Moscow and its partners were still discussing detailed maps and other conditions related to the Idlib and southern zones, while the borders of two other zones, in Homs province and near Damascus, had been agreed.

According to Lavrentyev, the agreement envisaged the presence of Russian military police in the buffer zones, adding, however, that "this matter has not been agreed yet."

"Depending on when the documents on safe zones are signed, I think one should expect concrete measures on the deployment of forces within 2-3 weeks," Russian negotiator said.

During a meeting in Astana on May 4, Turkey, Iran and Russia signed a memorandum to establish de-escalation zones in Syria.

Turkey, Iran and Russia previously agreed on the decision of the establishment of de-escalation zones in Idlib, parts of Aleppo, Latakia and Homs, Damascus/Eastern Ghouta and parts of Daraa and Quneitra.

Turkey, Russia and Iran are working on a mechanism of de-escalation zones in Syria involving the U.S. and respective zones assigned to each country, presidential spokesman İbrahim Kalın said last month, adding that the Astana and Geneva processes will continue in order to establish permanent peace in Syria.

Turkey and Russia have played a key role in establishing a nationwide cease-fire in the war-torn country and later agreed on the evacuation of Aleppo in late December 2016. After that, along with Iran, three countries took the initiative to bring together the Syrian regime and opposition in Astana to sustain a cease-fire agreement and to negotiate a political transition in the country.