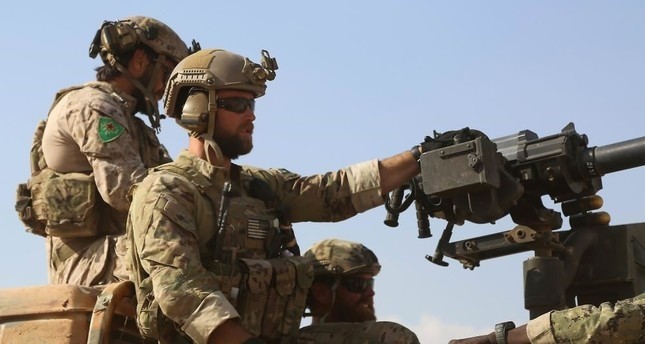 U.S. soldiers were seen wearing the insignia of the YPG terrorist group in late May. The incident soured Turkish-U.S. relations to a great extent.
by Daily Sabah with AFP Jul 12, 2017 12:00 am

The U.S. military advisors are operating inside the city of Raqqa, the Daesh terrorist group's last major bastion in Syria, a U.S. official said Wednesday.

The troops, many of them special operations forces, are working in an "advise, assist and accompany" role to support local militants from the Syrian Democratic Forces (SDF), an umbrella group comprising of mainly YPG terrorists as they battle another terrorist group, according to Colonel Ryan Dillon, a military spokesman.

The troops are not in a direct combat role but are calling in air strikes and are working closer to the fight than U.S. forces supporting the Iraqi military in Mosul did.

"They are much more exposed to enemy contact than those in Iraq," Dillon said.

He said the numbers of U.S. forces in Raqqa were "not hundreds."

The operation to capture Raqqa began in November and on June 6 the SDF entered the city.

With help from the U.S.-led coalition, the SDF this month breached an ancient wall by Raqqa's Old City, where Daesh terrorists are making a last stand.

Dillon said the coalition had seen Daesh increasingly using commercial drones that have been rigged with explosives. The militants employed a similar tactic in Mosul.

"Over the course over the last week or two, it has increased as we've continued to push in closer inside of Raqqa city center," he said.

The U.S. military is secretive about exactly how big its footprint is in Syria, but has previously said about 500 special operations fighters are there to train and assist the SDF.

Additionally, Marines are operating an artillery battery to help in the Raqqa offensive.

The U.S. has been actively supporting YPG terrorists, despite Turkey's strong objections. Turkish officials have reiterated numerous times that a terrorist group cannot be used to fight another terrorist group, pointing to the YPG's strong operational and ideological ties to the PKK.

The PKK is recognized as a terrorist group by the U.S. itself, EU, Turkey and many other countries.