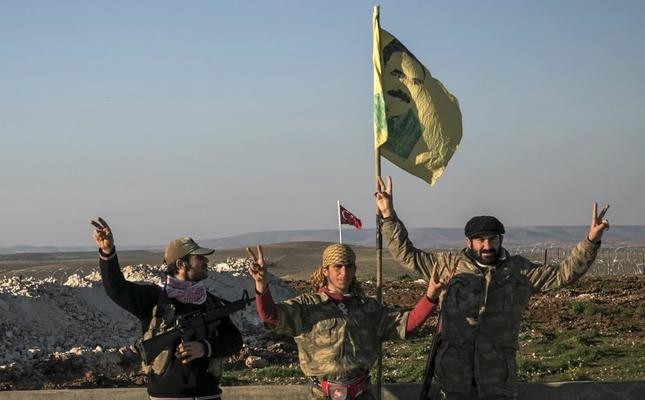 In this file photo, YPG militants are seen next to a drawing of jailed PKK leader Abdullah u00d6calan in Esme village of Aleppo province, Syria.
by Daily Sabah Jul 19, 2017 12:00 am

The move was long sought by Russia, a close ally of Bashar Assad.

On the other hand, the superpower continues supporting YPG/ PYD terrorists in their fight against another terrorist group, Daesh.

Despite Turkey's numerous warnings about the risks of cooperating with a terrorist group, the U.S. still continues to collaborate with the militants of PKK's Syrian wing, a group recognized as a terrorist organization by the U.S. itself, Turkey, the EU, and many other countries.

The train-and-equip program was central to the Syria policy of Trump's predecessor. Former U.S. President Barack Obama employed the strategy to put pressure on the Assad regime, a move then supported by Turkey.

After the U.S. decided to support the PKK in Syria, namely the YPG/PYD, Turkish-American diplomatic relations have soured dramatically.