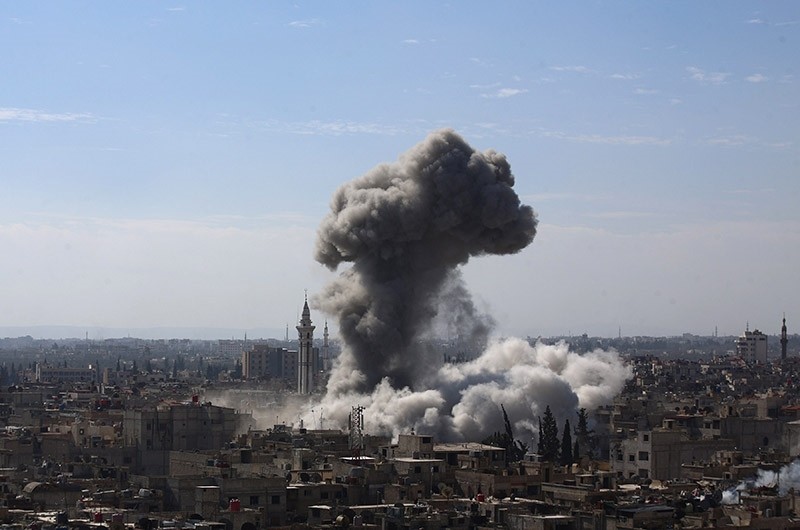 A cloud of smoke rises following an air strike by Assad regime forces in the opposition-held area of Douma, north east of the capital Damascus, Syria, February 5, 2015. (AFP Photo)
by Compiled from Wire Services Jul 25, 2017 12:00 am

An air strike killed eight civilians late Monday in an opposition-held town east of Damascus where a truce was supposed to have taken effect at the weekend, a monitor said.

Three children and a woman were among the dead in the 11:30 pm (2030 GMT) strike on Arbin in the Eastern Ghouta opposition enclave where the Assad regime declared a ceasefire Saturday, the Syrian Observatory for Human Rights said.

The Observatory chief Rami Abdel Rahman said either regime warplanes or those of its Russian ally carried out the strike, which also wounded at least 30 people.

"This is the first time that civilian martyrs have fallen as a result of regime or warplane bombardment since the start of the ceasefire agreement in the Eastern Ghouta," the Observatory said.

Russia, a military ally of the Assad regime, said it had deployed military police and set up two checkpoints and four observation posts in the Eastern Ghouta on Monday to try to enforce a de-escalation zone it said it had agreed with the Syrian opposition there.

The truce announced for Eastern Ghouta on Saturday was the second unveiled under an agreement struck by regime allies Iran and Russia and opposition backer Turkey in May.

A similar ceasefire was announced for southern areas of Syria on July 9.

Under the agreement, so-called "de-escalation zones" are planned for four key battlegrounds between regime forces and the opposition.

But there have been disagreements over their borders and who will police them.

The Assad regime, with military support from Russia and Iran, has dealt the opposition a string of defeats around the capital over the last year, seizing back control of areas including Daraya and Moadamiya.