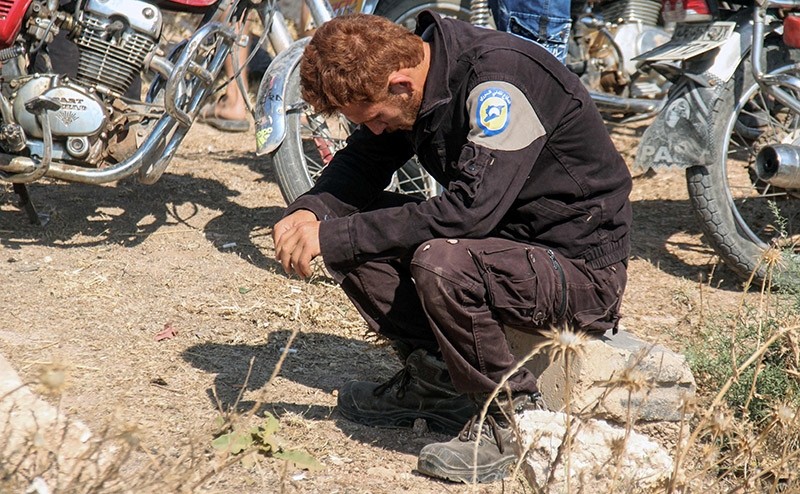 A member of the Syrian civil defence volunteers, also known as the White Helmets, mourns as colleagues bury his fellow comrades during a funeral in Sarmin (AFP Photo)
by Compiled from Wire Services Aug 12, 2017 12:00 am

Seven civil defense volunteers were shot dead in north-eastern Syria on Saturday, according to a Syrian paramedic group.

A spokesman for the Syrian Civil Defense group said gunmen stormed their camp in the town of Sarmin in Idlib province.

"The civil defense center in Sarmin was the target of an armed attack by unknown assailants in which seven volunteers were killed," the White Helmets said in statement.

"Two minibuses, some white helmets and walkie-talkies were stolen."

It was not immediately clear whether the motives for the raid were political or purely criminal.

The Syrian Observatory for Human Rights said the seven volunteers had all been killed by bullets to the head.

"Colleagues came in the morning for the change of shift and found them dead," its director, Rami Abdel Rahman, told AFP.

Popularly known as White Helmets, the Syrian Civil Defense group is active in opposition-held areas in Syria, which has been locked in a devastating civil war since early 2011, when the Assad regime cracked down on pro-democracy protests with unexpected ferocity.