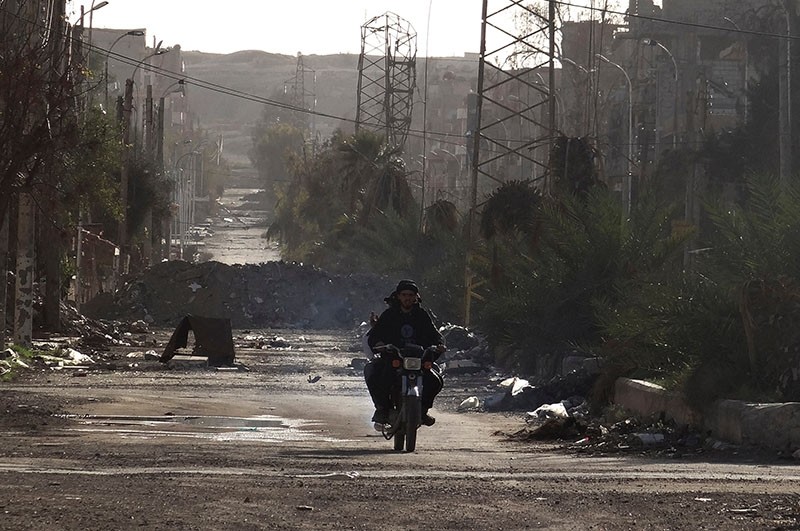 With a sudden lunge through the lines of terrorists, the Assad regime forces and its allies on Monday came to within three kilometers of relieving the Euphrates city of Deir el-Zour in east Syria, where Daesh has besieged an army garrison and 93,000 civilians for years.

The advance on the eastern city marks another stinging setback for the once-triumphant Daesh, fast retreating in both Iraq and Syria as its self-declared caliphate crumbles.

Regime troops were rapidly approaching the city on Monday, reaching a point three kilometers (2 miles) from their comrades in the city, state television reported. The advance comes amid speculation about a potential Deir el-Zour operation by U.S.-backed Syrian Democratic Forces (SDF) that could seek to secure parts of the province to the east of the city.

The Britain-based Syrian Observatory for Human Rights said Monday that the advancing forces are less than 10 kilometers (6 miles) from a besieged, regime-held air base known as Brigade 137. If they reach the base, they will be able to lift the siege.

Deir el-Zour's provincial governor said on Sunday he expected the army to reach the city by Tuesday night. A military media unit run by the regime's ally Hezbollah said the advancing forces were heading to the besieged garrison's camp on the city outskirts.

"Daesh is in confusion. There is no leadership or centralized control," said a commander in the military alliance supporting Bashar al-Assad.

Hemmed in on all sides, Daesh is falling back on a last Euphrates stronghold downstream of Deir al-Zor in the towns of al-Mayadin and al-Bukamal near the border with Iraq.

But as it has lost its core territory - defeated in Iraq's Mosul and yielding street after street in its de facto Syrian capital of Raqqa - the ultra-hardline group has still been able to launch attacks in the West and maintain a threat in other centers such as Libya.

In Daesh-encircled Deir el-Zour, news of the army's approach prompted people to take to the streets to celebrate, governor Mohammed Ibrahim Samra said by phone.

However, thousands of people have been fleeing Deir el-Zour province because of the offensive, many of them heading toward the northeastern province of Hassakeh held by U.S-backed SDF, a coalition in which PKK's Syrian offshoot People's Protection Units (YPG) is the dominant force. Last week dozens of people trying to leave the region were killed or wounded by mines laid by the Daesh militants.

The city has been cut off since 2013, after opposition groups rose up against Assad during the first flush of Syria's six-year war. Daesh then overran opppoistion positions and surrounded the army's enclave in the city in 2014.

It was a major prize. Deir el-Zour is the center of Syria's oil industry, a source of wealth to the group and a serious loss to Damascus. As the army has pushed east in recent months, oil and gas fields have once more fallen to the regime.

Daesh fighters have stepped up efforts this year to seize the enclave before the army could arrive. In January, they managed to sever it from the military airbase in the city and take over a nearby hill, further straining its links to the outside.

During the long siege, the city has been supplied via high-altitude air drops. The United Nations said in August it estimated there were 93,000 civilians in the regime's Deir el-Zour pocket, where conditions were "extremely difficult". The pre-war population of once one of Syria's most developed cities was 300,000.

"Despite all this and despite the shelling and injured, things are running in the city. The institutions are running, the bakeries. Water is also pumped twice a week to our residents, aid is distributed daily," governor Samra said.

The U.N. began air dropping aid into the city in April 2016, and it has staged dozens of deliveries of food and other humanitarian supplies.

But that route has also been fraught with difficulties, and the program was briefly suspended after the Daesh advance in January during which the terrorist group overran the aid dropzone.

For Assad, the weekend's lightning advance caps months of steady progress after regime forces turned from their victory over the opposition in Aleppo last December to push eastwards against Daesh.

"The army has been advancing in a rapid and calculated way from all directions," a regime military source said, referring to the months-long campaign across the desert.

Aided by Russian jets and an alliance of Shiite militias backed by Iran, including Lebanon's Hezbollah, the regime army has captured swathes of the central and eastern deserts in parallel offensives from Palmyra and al-Resafa.

Those offensives have accelerated since linking up last month, enclosing two big Daesh pockets and overrunning all but a small portion of one of them, near the town of al-Salamiya.

As the army and its allies have advanced on Deir el-Zour, Daesh has pulled reinforcements from al-Mayadin and used its usual tactics of booby traps, mines and sudden raids, the commander in the pro-Assad military alliance said.

The very rapid advance in recent days was the result of heavy preparatory bombardment, a multi-pronged assault and gains in high ground commanding the surrounding area, the commander said.

The Russian Defense Ministry said its aircraft have carried out 80 airstrikes, destroying two tanks and killing and wounding 70 people in the Deir el-Zour area.

Meanwhile, as the army and its allies have forced other militant pockets to surrender, including a Daesh enclave on Syria's border with Lebanon a week ago, it has been able to transfer more troops to the desert campaign.

"It helped a lot to switch the military effort of the Syrian army and the resistance to the eastern Syrian desert," the commander said, adding that thousands of troops had arrived from the battle on the Lebanon border.

Daesh fighters and their families evacuated from that enclave as part of a surrender deal were escorted by the regime army and Hezbollah to east Syria, but have been stopped by a U.S.-led coalition from reaching Deir el-Zour.

Ten of the original 17 buses are now stuck in no-man's land between pro-regime forces and Daesh territory and six buses retreated back into regime areas, the commander added.