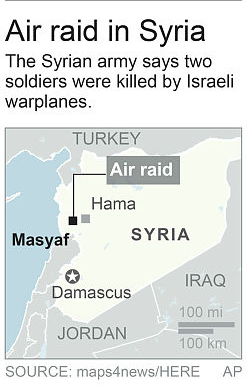 The army said the air raid targeted a facility near the western town of Masyaf, close to the Mediterranean coast, a stronghold of the Assad regime.

The army said the Israeli warplanes fired several missiles while in Lebanese air space, and warned of the "dangerous repercussions of such hostile acts on the security and stability of the region."

The airstrike took place beside an adjacent military camp where ground-to-ground rockets are stored, the Syrian Observatory for Human Rights said. The military site in Masyaf includes a training camp and a branch of the Scientific Studies and Research Center (SSRC)

The United States has imposed sanctions on employees of the SSRC, which it describes as the Syrian agency responsible for developing and producing non-conventional weapons including chemical weapons, something Damascus denies.

While largely staying out of the Syrian civil war, Israel has carried out a number of airstrikes against suspected arms shipments believed to be headed to Lebanon's Hezbollah militant group, which is fighting alongside Assad's forces.

"The strike reported last night is not routine. It targeted a Syrian military-scientific center for the development and manufacture of, among other things, precision missiles. which will have a significant role in the next round of conflict," tweeted Amos Yadlin, formerly an Israeli Air Force general and military intelligence head.

He added: "The factory that was targeted in Masyaf produces the chemical weapons and barrel bombs that have killed thousands of Syrian civilians. If the attack was conducted by Israel, it would be a commendable and moral action by Israel against the slaughter in Syria."

Rami Abdurrahman, who heads the Britain-based Syrian Observatory for Human Rights, said two facilities were hit, a scientific research center and a nearby military base where short-range surface-to-surface missiles are stored. He said the attack killed two people and wounded five.

"Many explosions were heard in the area after the air raid," said Abdurrahman, whose group relies on a network of activists across the country. He said some of the blasts may have been secondary explosions from a missile storage facility being hit.

He said Lebanese Hezbollah fighters and Iranian military officials often visit the site. He said those killed and wounded were Syrians, adding that it was not immediately clear if there were casualties among Iranian and Hezbollah operatives.

The air raid came a day after a U.N. probe found the regime responsible for a chemical attack in April in northern Syria that killed more than 83 people. The attack prompted the United States to launch a cruise missile strike on the Shayrat Air Base where it said the attack had originated.

Weeks later, the U.S. sanctioned 271 Syrian chemists and other officials affiliated with the SSRC, which it said was behind the regime's efforts to develop chemical weapons.

The regime claims it no longer possesses chemical weapons after a 2013 agreement under which it pledged to surrender its chemical arsenal.

But in 2016, a UN-led investigative body said the Syrian government was behind at leat three chemical attacks in northern Syria in the previous two years.

In 2013, Syria said Israeli warplanes carried out an air raid on a scientific research center in the Damascus suburb of Jamraya.