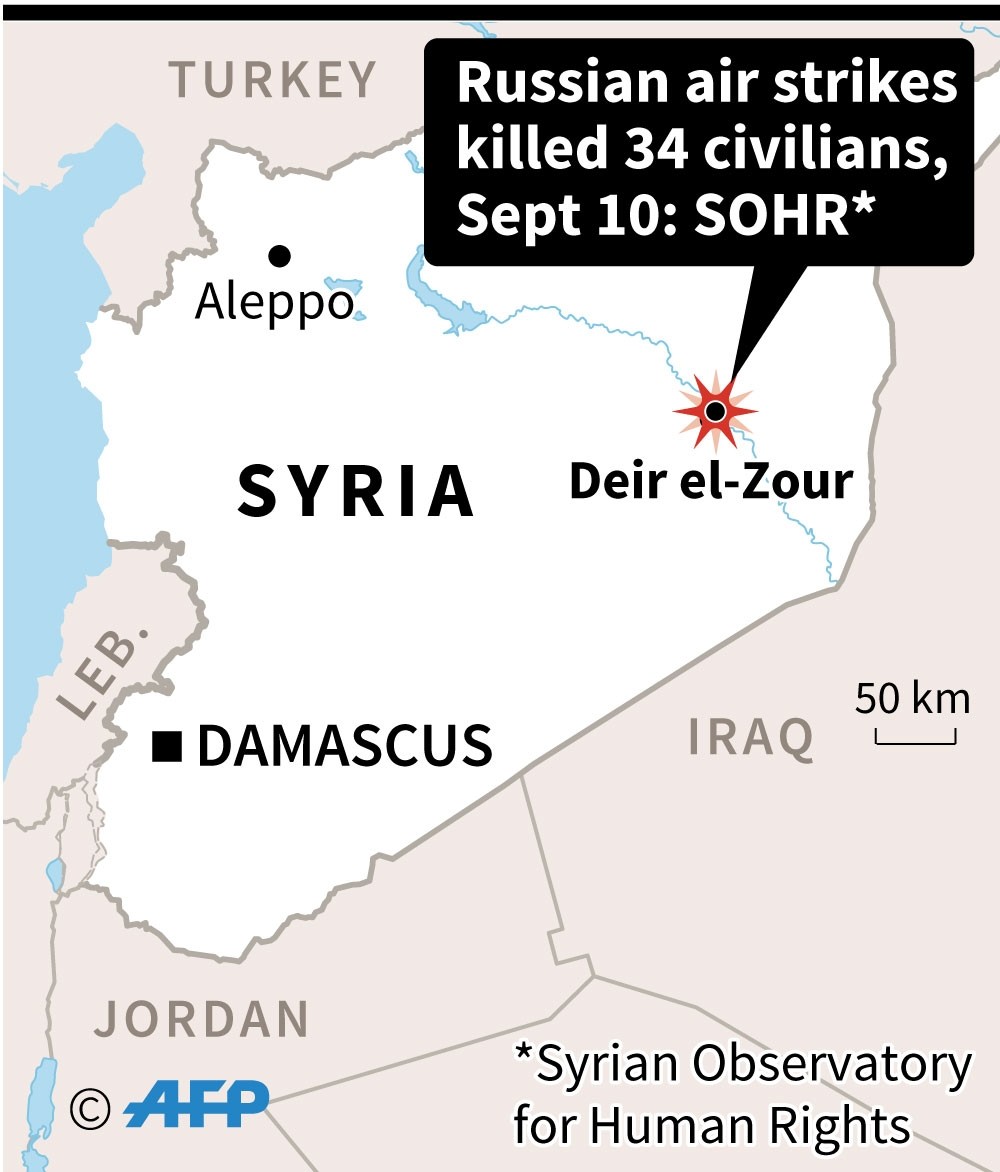 Suspected Russian air strikes killed 19 civilians outside the Syrian city of Deir el-Zour on Monday, a monitor said, in a second day of deadly strikes in the region.

The Britain-based Syrian Observatory for Human Rights said two sets of strikes half an hour apart targeted the village of Al-Khrayta, killing eight civilians in tents along the Euphrates River and another 11 in boats on the water.

Two sets of strikes 30 minutes apart hit civilians sheltering in tents along the Euphrates and boats on the river, the monitor said.

The deaths came a day after the monitor said Russian air strikes killed 34 civilians in ferries carrying them across the Euphrates southwest of the city.

The air strikes come as the Syrian regime army prepares to push into the eastern Daesh-held part of Deir el-Zour city, according to the Observatory.

"Huge military reinforcements, including equipment, vehicles and fighters have arrived in Deir Ezzor ahead of an attack to push Daesh from the city's eastern neighborhoods," said Observatory chief Rami Abdel Rahman.

"Russian and Syrian regime warplanes are striking Daesh positions in the city and its outskirts," he added.

Deir el-Zour province is the capital of the oil-rich eastern province of Deir el-Zour, regarded as a strategic prize by both Russian-backed Assad regime troops and U.S.-backed fighters.

Regime forces have scored major advances in recent days, breaking a pair of Daesh sieges on the city and capturing territory around it.

Since 2014, Daesh has controlled most of Deir el-Zour and the surrounding province, which borders territory the terrorists hold in Iraq.

The remaining 40 percent of the city still held by the Syrian regime -- and home to around 100,000 civilians -- was under crippling Daesh siege.

Moscow intervened in Syria in September 2015 in support of its ally Bashar Assad.

Syria's conflict erupted in 2011 with protests calling for Assad's ouster, but it has since evolved into a complex war drawing in world powers.

More than 330,000 people have been killed and millions have been forced to flee their homes.