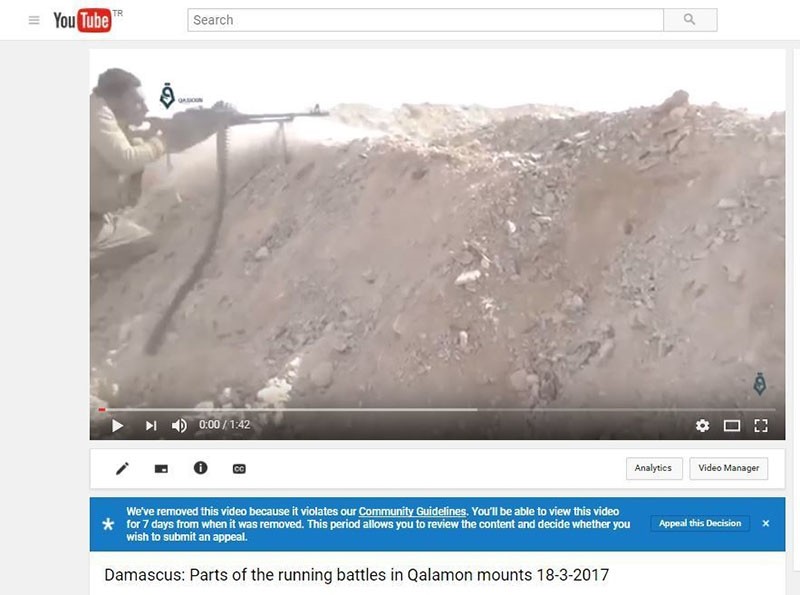 In this screen shot provided by the Shaam News Network on Sept. 12, 2017 shows a message from YouTube to the group that an uploaded video needs to be reviewed because it violates the company's community guidelines. (AP Image)
by Associated Press Sep 13, 2017 12:00 am

Syria's civil war has been one of the modern world's most brutal conflicts and one of its most heavily filmed. Hundreds of thousands of amateur videos uploaded to YouTube document every heartbeat of the war over the past seven years, from momentous events like cities under bombardment to intimate scenes like a father cradling his dead children.

Syrian activists fear all that history could be erased as YouTube moves to rein in violent content. In the past few months, the online video giant has implemented new policies to remove material considered graphic or supporting terrorism, and hundreds of thousands of videos from the conflict suddenly disappeared without notice. Activists say crucial evidence of human rights violations risks being lost — as well as an outlet to the world that is crucial for them.

Activists are rushing to set up alternative archives, but they also recognize nothing can replace YouTube because of its technological infrastructure and global reach.

"It is like we are writing our memories — not in our own book but in a third party's book. We don't have control of it," said Hadi al-Khatib, co-founder of the Syrian Archive, a group founded in 2014 to preserve open source evidence of crimes committed by all sides of the Syrian conflict.

Based on his database and review of around 900 groups and individuals, al-Khatib said some 180 channels connected to Syria were shut since June, when YouTube began using machine learning protocols to sift through videos on the site for objectionable content.

Working with YouTube, al-Khatib's group secured the return of about 20 channels, salvaging about 400,000 videos. But about 150,000 videos remain in jeopardy, pending a decision from YouTube, which is still reviewing whether to reinstate them, he said.

"Nothing is lost forever yet," al-Khatib said, speaking from Berlin. "But this is very dangerous, because there is no alternative for YouTube."

YouTube, which is owned by Google, says it will correct any videos improperly taken down and that it is in dialogue with the activists on a solution. But many activists fear a repeat or a permanent loss. The shutdowns were chilling for a community that had just celebrated a possible precedent for Syria when the International Criminal Court in August issued an arrest warrant based on video evidence for a Libyan military commander.

One prominent Syrian human rights group, the Video and Documentation Center in Syria, said it will stop using YouTube and will set up its own storage and platform. "The risk became very big now and we don't trust this platform anymore for keeping violations evidence," Husam AlKatlaby, VDC executive director, said in an email.

VDC, registered in Switzerland, has specialized in documenting rights violations since 2011. The group limited access to its YouTube channel since 2014, making it a closed channel, after the company warned it over graphic content.

But not everyone can afford to go on their own. Also, YouTube provides activists with personal accounts for free and technological tools to edit, translate and upload anytime — vital for people taking video out in the field in dangerous circumstances.

Activists used YouTube first to report on the peaceful protests that erupted in 2011 against the rule of Bashar Assad, using videos taken on mobile phones. As the conflict got bloody, so did the videos, catching the aftermath of chemical attacks, spectacular aerial bombings, rescuers pulling children from rubble, and new strikes hitting rescuers and survivors. Militant groups uploaded videos of beheadings. Regime supporters uploaded their own imagery and propaganda.

Often, the images were the only thing to grab the world's attention in an intractable conflict. A video last year that was viewed more than 4.3 million times showed a child covered in blood and dust after surviving an airstrike in Aleppo, as government forces advanced to recapture the city.

In the Syrian context, that often turned political. Supporters and opponents of the Syrian regime have waged digital wars reporting each other's channels or videos, prompting YouTube to close some. Many videos were lost, including footage of a 2013 chemical attack in a Damascus suburb.

Under pressure in Europe and the West to do more to rein in extremist content, YouTube introduced a number of new measures, including machine learning, which trains itself to recognize patterns in enormous numbers of videos. It identifies "objectionable" material, which is then reviewed by human experts to determine if it should be taken down.

"The vast majority of time our reviewers get it right. And when we make mistakes, we act quickly to correct them," the spokesperson said, speaking on condition of anonymity in line with company regulations.

The spokesperson said activists need to improve their data when uploading videos, properly identify them as documenting rights violations and provide context. Meanwhile, the machine learning is being tweaked.

Robin Gross, the executive director of the San Francisco-based IP Justice, an organization that promotes internet freedom, said powerful images, even if bloody, can change the minds of the public, as they did in the U.S. war in Vietnam.

"Machine learning software doesn't evaluate the importance of understanding conflict and how an image, even a graphic one, can contribute to better understanding of a situation, which is necessary for addressing it," Gross said in an email.

The closures' suddenness and breadth stunned those documenting the conflict. Many opposition activists already feel the international scene is turning against them as the regime and its allies make major battlefield gains. Some were convinced the YouTube shutdowns were because of political pressure.

"There are attempts to finish off the conflict in Syria by any means, including having no coverage or a total blackout on the media by the Syrian opposition," said Tala Kharrat, spokesman for Qasioun News Agency, whose channel was among those shut down and subsequently reopened on appeal.

Another prominent news platform, the Shaam News Network, has nearly 400,000 videos on its YouTube channel, viewed some 90 million times. In July, its operators found a message saying their channel no longer exists.

Mizyan Altawil, spokesman for SNN, said his network is no stranger to scrutiny of its content, but this time the shutdown was different, with no prior warning. Even more confusing, the channel was reinstated, only to be closed again, then reopened. "We are constantly on the alert," Altawil said.

The Syrian Archive reached out to activists and media groups affected by the removal and contacted YouTube to restore them. With a team of six and a budget of $96,000, the Archive is also downloading videos to its own server, an expensive and labor-intensive endeavor. The group is partially funded by Google through its Digital News Initiative.

Al-Khatib said the group knew the issue will come up one day, given concerns over proliferation of violent content, and that it was always a "grey area" how long YouTube would handle graphic material.

But the best evidence for war crimes can come from videos showing violence, even ones uploaded by the perpetrators with the intent to terrorize, like an execution video. Sometimes such videos identify and show the faces of militants.