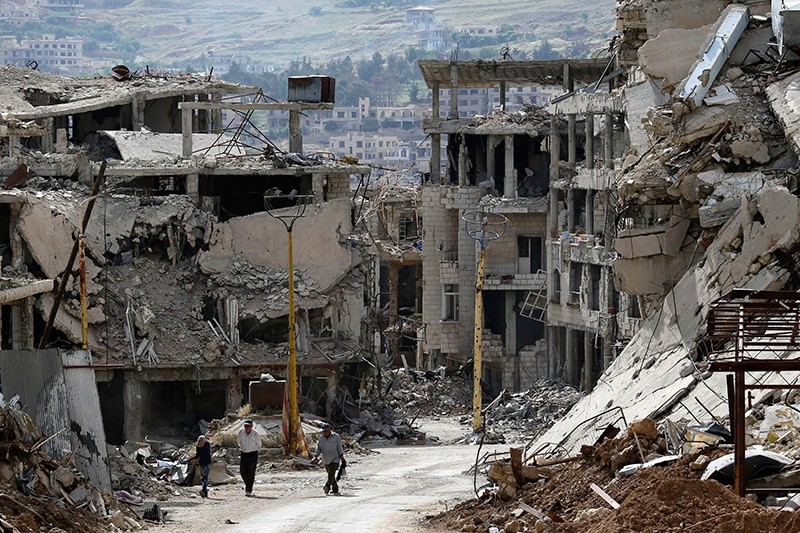 The United States, the United Kingdom, Turkey and other countries opposed to the Assad regime will not support the reconstruction of the country until there is a political transition "away from Assad," British Foreign Secretary Boris Johnson said Monday.

The "Friends of Syria" group, an alliance of mainly Western and Gulf Arab countries, met in New York on Monday on the sidelines of the U.N. General Assembly at a time when the conflict in Syria, now in its seventh year, appears to be less urgent with attention focused on the North Korean nuclear threat and the fate of the Iran nuclear deal.

"We believe that the only way forward is to get a political process going and to make it clear to the Iranians, Russians and Assad regime that we, the like-minded group, will not support the reconstruction of Syria until there is such a political process and that means, as Resolution 2254 says, to a transition away from Assad," Johnson said.

He was speaking after a meeting of about 14 countries that back the Syrian opposition including France, Saudi Arabia, Turkey and the United States.

The U.N. Security Council has adopted a Syria transition road map through a Geneva-led process.

Russia joined the war on Assad's behalf in 2015, turning the momentum in his favor. Assad also enjoys robust support from Iran and Lebanon's Hezbollah. Meanwhile, the moderate Syrian opposition is moribund and the United States has largely stepped back from a leading role in Syrian diplomacy.

Acting Assistant Secretary of State for Near Eastern Affairs, David Satterfield, said all those at the meeting agreed that "there has got to be a political process if there is to be any international participation in the reconstruction of Syria."

"The regime and the regime supporters cannot declare a victory solely based on a map and colors of positions on the ground," Satterfield said.

The meeting on Monday was in stark contrast to last year's which took place after a ceasefire deal between the United States and Russia effectively collapsed when an aid convoy was bombed in Aleppo, Syria's largest city.

Aleppo is now in the hands of Assad's forces and Assad himself is in a much stronger position, thanks to Russian and Iranian support.

The last major international attempt to resolve the crisis ended in failure when the International Syria Support Group (ISSG), which included Iran, was cast aside after the Assad regime forces retook the opposition stronghold of Aleppo in 2016.

Russia, Turkey and Iran have been negotiating separately for months in Astana to try to reduce the violence on the ground by creating de-escalation zones across the country, although those talks do not cover a long-term political solution

"We discussed here how to bring it back to the U.N.-led process and Geneva," Swedish Foreign Minister Margot Wallström told Reuters.

Asked if there was consensus on that, she said "I would say so."

"It's good if the Astana process leads to de-escalation and a reduction of the violence but it has to lead into the political process."

Earlier on Monday, France warned that the status quo in Syria risked leading to the country's permanent fragmentation and opening the door to new extremist groups.

Foreign Minister Jean-Yves Le Drian told reporters in New York he would hold a meeting with the four other permanent members of the Security Council - Britain, China, Russia and the United States - on Thursday to persuade them to create a contact group to give new impetus to end the seven-year conflict.

Le Drian said "realism" dictated that Assad could not stay in power after millions of Syrians had fled the country due to the war, but that it was vital major powers worked together to help revive U.N.-brokered peace talks in Geneva.

Dutch Foreign Minister Bert Koenders said the French contact group proposal was not discussed at the Friends of Syria meeting.

But Riyad Hijab, a prominent Syrian opposition leader, said he told French President Emmanuel Macron that the initiative was important in part because "of American withdrawal and Russia is dominating the entire process. So Mr. Macron's initiative is the right way to fix this because it's vital all five (permanent Security Council members) are involved in the process."