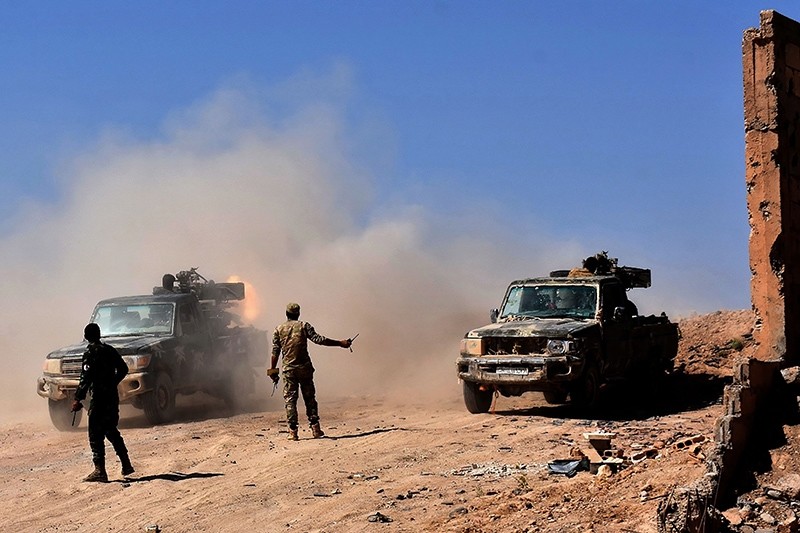 Russia warned the United States of reprisals Thursday after artillery fire from an area controlled by the U.S.-backed fighters in eastern Syria targeted Assad regime troops.

A military spokesman in Moscow blamed Syrian Democratic Forces (SDF), dominated by the PKK terrorist group, and said future attacks would be repelled.

The Russian Defense Ministry said the SDF had taken up positions on the eastern banks of the Euphrates with U.S. special forces, and had twice opened fire with mortars and artillery on Assad regime troops who were working alongside Russian special forces.

"A representative of the U.S. military command in Al Udeid (the U.S. operations center in Qatar) was told in no uncertain terms that any attempts to open fire from areas where SDF fighters are located would be quickly shut down," Major-General Igor Konashenkov said in a statement.

"Fire positions in these areas will be immediately suppressed with all available weapons," he said.

Russia is supporting the current offensive by the Assad regime forces against Daesh terrorist group near the city of Deir el-Zour with air cover, while Russian special forces are also active in the area.

Konashenkov said regime forces control 85 percent of Deir el-Zour. "The city will be liberated in the coming week," he said.

On Monday, the regime troops crossed the Euphrates river, sealing off the city on three sides.

Meanwhile, SDF, which is predominantly led by the terrorist PKK's Syrian affiliate, the People's Protection Units (YPG), is pushing the Daesh group from the northeastern part of the province, as the U.S.-led coalition provides air cover.

In Deir el-Zour province of eastern Syria, Daesh is battling two separate offensives, launched by the SDF on one side and the Assad regime army and its allies on the other.

To prevent the two operations from clashing, the coalition, the SDF, Assad regime and Russia agreed on a "de-confliction line" that runs from the neighboring province of Raqqa southeast along the Euphrates to Deir el-Zour.

But on Saturday the U.S.-led coalition and the SDF accused Russian warplanes of bombing SDF fighters east of the river, an allegation that Moscow denied.

Konashenkov said Assad regime forces have continued the offensive on the eastern side of the Euphrates over the past day, "freeing 16 square kilometers and two villages from terrorists."

Meanwhile, the Pentagon confirmed that the SDF continues its advance in the province of Deir ez-Zor.

He refused to comment on which group is going to take control of Syria's border with Iraq, which is held by Daesh.

"It is not appropriate for me to speculate about future military operations," he said.

A longtime ally of the regime, Russia stepped into the multi-front conflict in September 2015 and shifted the balance of power in favor of Assad regime with extensive air support and other aid.