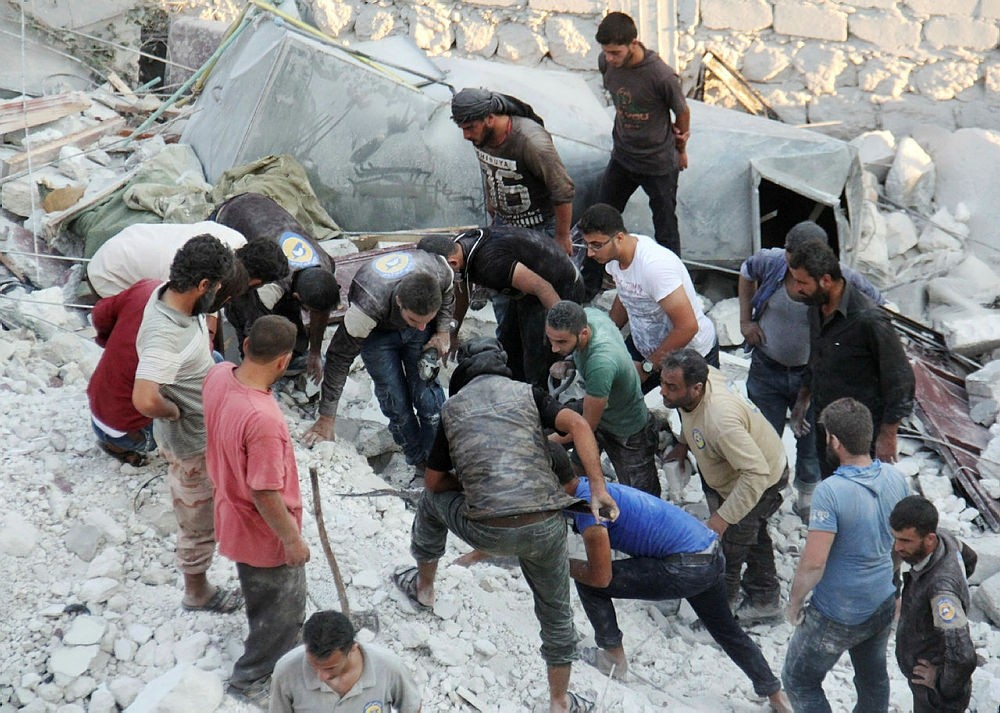 | Residents and members of the Syrian Civil Defence, also known as White Helmets, search for victims in the northwestern town of Harim in Idlib province, on September 29, 2017. (AFP Photo)
by Oct 01, 2017 12:00 am

Syria's war killed at least 3,000 people including 955 civilians in September, the deadliest month of the conflict this year, the Syrian Observatory for Human Rights monitor said on Sunday.

Hundreds of thousands of Syrians have been killed and millions displaced since the war erupted in 2011 with the brutal repression of anti-regime protests.

It has since spiraled into a complex conflict involving world powers, with Russia-backed regime forces and a US-supported alliance separately battling the Daesh group in the country.

The 955 civilians killed in September included 207 children, said the Britain-based Observatory, which relies on a wide network of sources inside Syria for its information.

"More than 70 percent of the civilians were killed in the regime and Russian air strikes, or in air raids of the international coalition" fighting Daesh, the monitor's head Rami Abdel Rahman said.

Backed by Russian air strikes, the forces of Syria's regime leader Bashar al-Assad are pressing a battle to retake Daesh-controlled areas in the eastern province of Deir Ezzor.

Air strikes targeting Al-Toub village in Deir Ezzor province Sunday killed 12 civilians including five children, the Observatory said, adding that they may have been carried out by Russian warplanes.

The number of people killed in September was higher because of increased fighting and "intensified air raids of the international coalition and Russia against extremist bastions in the north and east of Syria, but also due to increased Russian and regime strikes on opposition-held areas," Abdel Rahman said.

Russian and regime warplanes have in the past two weeks increased their strikes on the northwestern province of Idlib, which is largely controlled by Hayat Tahrir al-Sham (HTS), a group led by Al-Qaeda's former Syria affiliate.

Eight children were among at least 34 civilians killed in strikes overnight Friday-Saturday on the town of Armanaz in Idlib, the Observatory said.

HTS is not party to a deal brokered by Russia, Turkey and Iran for a safe zone in the province, one of four such "de-escalation" zones nationwide.

The Observatory said the September toll also included 790 regime troops and loyalists, 738 militants from Daesh and HTS, and 550 rebels and Kurdish fighters.

Early on Sunday, Daesh retook the town of Al-Qaryatain in the central province of Homs, previously a symbol of religious coexistence.

Government troops have now surrounded Al-Qaryatain, where several Christian families are believed to be living, the Observatory said.

In August 2015, Daesh abducted 270 Christians from the town, transporting them around 90 kilometers (55 miles) away deep into the Syria desert and then locking them up in an underground dungeon. They were freed 25 days later.

The same month, Daesh ravaged a monastery in the town and reduced a fifth-century mud-brick church to rubble with explosives and bulldozers.

Russia-backed Syrian regime troops have been battling for months to retake the Badiya, which stretches from the countrcenterntre to the Iraqi and Jordanian borders and has been held by Daesh since 2014.

Last month, they broke a years-long Daesh siege of government enclaves in the eastern city of Deir Ezzor.