Radical elements may be forced out of Idlib 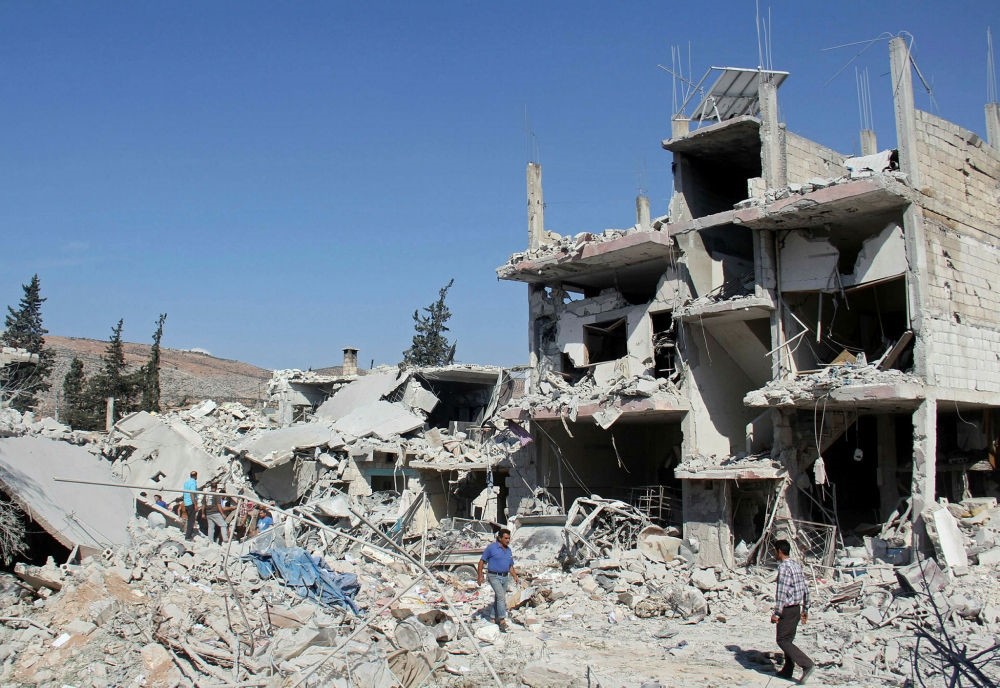 Residents search for survivors amid the rubble of a building following a reported overnight air strike in Idlib province near the Turkish border on Sept. 30.
by Yusuf Selman İnanç Oct 06, 2017 12:00 am

Turkey, Iran and Russia may attempt to force radical elements, primarily the al-Qaida-affiliated Tahrir al-Sham, to leave Idlib, though the common stemmed from different reasons

On Wednesday, Russia said that its warplanes his a meeting of Tahrir al-Sham, formerly known as Jephat Fateh Sham and Japhat Nusra, killing 12 field commanders and wounding its leader, Abu Mohammad al-Jolani. According to the Russian statement, the leader lost one arm and is in serious condition. The Russian Defense Ministry said in a statement that it had targeted Abu Mohamad al-Golani in an intelligence-led special operation while he was meeting with field commanders, and Defense Ministry spokesman Igor Konashenkov said the militant leader had been badly hurt. "As a result of the strike, the Nusra Front leader, Abu Mohamad al-Golani, sustained numerous shrapnel wounds and, having lost an arm, is in a critical condition, according to information from several independent sources," Konashenkov said.

The six-year civil war in Syria with the participation of several regional and international actors has been relatively calm in the last few months since the conflicts have mostly been concentrated on the fight against Daesh. Russia, Iran and Turkey, which have been working together in talks in Astana, Kazakhstan, to set up de-escalation zones in Syria, expressed their common concerns of a possible renewal of clashes and bloodshed in Idlib, as happened last year in Aleppo.

While Russia and the U.S. consider the former al-Qaida-affiliated Tahrir al-Sham to be as dangerous as Daesh, Turkey has also expressed its discontent since the radical group had attacked forces Turkey backs that are fighting the Syrian PKK affiliate Democratic Union Party's (PYD) People's Protection Units (YPG). Tahrir al-Sham has not joined Turkey's fight against the YPG, fighting instead against the Turkey-backed Free Syrian Army (FSA), leading Ankara to designate it as a terrorist group. Therefore, Turkey is luring militants away from the radicals' alliance that controls Syria's northwestern Idlib province in a step toward implementing a deal to reduce violence there, Foreign Minister Mevlüt Çavuşoğlu said on Tuesday. "Çavuşoğlu's comments endorsed remarks by a rebel source who said that efforts by foreign states were under way to encourage defections from the alliance, to break it up, isolate it and reduce its capacity to oppose any Turkish military deployment. 'With regards to Nusra, they are working to weaken it through intelligence operations, a source told Reuters, which could include assasinations and campaigns to undercut the group's popular support.

Turkey has placed some opposition factions in the country's north after a military incursion last year to blocking YPG advances. Ankara also has to deal with the humanitarian side of the crisis, as it is home more than 3 million refugees, and a new clash in Idlib would be more costly. The humanitarian situation in Idlib has worsened, with people suffering from food, water and energy shortages. Due to internal migration from southern parts of the war-torn country, mainly Aleppo, Idlib is densely populated and rent is very competitive. As a result, many people live in tents, mud houses and on the streets. Turkey has built many camps along its border with Syria, but the increasing number of displaced people is uncontrollable. There are almost no schools or other education services for children, and people's ultimate goal is to survive. While Turkey provides ambulance services for the sick and wounded, there are very few hospitals in the city, as airstrikes have destroyed many of them.

Russia, with hopes of keeping Bashar Assad in power, wants to see no clashes in the country's west and is focused on the fight to eradicate Daesh. At this point, the main rival of Russia and its proxies appears to be the PYD. The bombing of some YPG positions last month signaled that Russia might take stricter measures against the group's advance toward the south, where oil fields are located. Turkey's interests seem to be overlapping with those of Russia while Iran is exhausted from having lost a number of militants and some soldiers in the clashes.