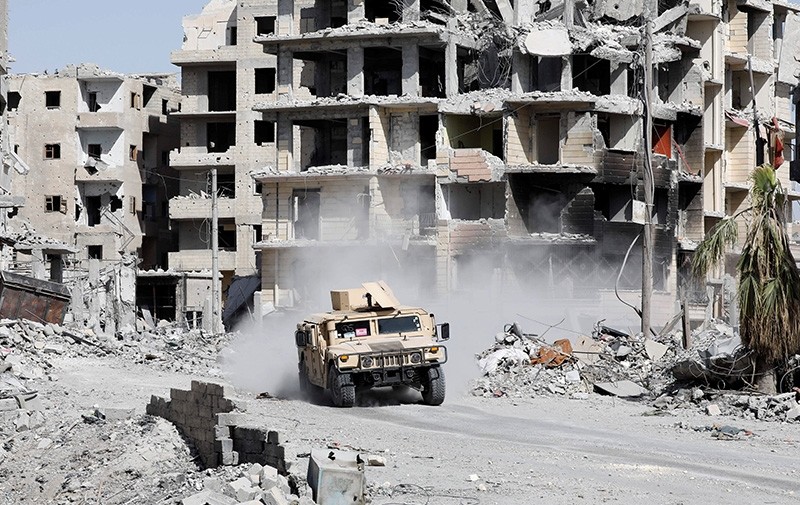 A convoy is set to leave the Daesh-held enclave of Syria's Raqqa city on Saturday under an arrangement brokered by local officials, the U.S-led coalition against Daesh in Iraq and Syria said on Saturday.

The statement said the coalition does not condone "any arrangement that allows (Daesh) terrorists to escape Raqqa without facing justice".

The Syrian Observatory for Human Rights war monitor previously said Saturday that there were buses inside Syria's Raqqa which would be used to transport remaining Daesh terrorists and their families out of the city.

Around 100 Daesh terrorists have surrendered in Syria's Raqqa in the last 24 hours and were "removed from the city", a spokesman for the U.S-led coalition against Daesh told Reuters on Saturday.

"The battles are continuing in Raqqa city. Daesh is on the verge of being finished. Today or tomorrow the city may be liberated," Nouri Mahmoud, spokesman of the PKK-affiliated YPG terror group told Reuters by telephone.

Remaining Daesh fighters in Raqqa, including foreign fighters, would leave the city taking civilians with them as human shields under a deal which tribal elders from the area are seeking to broker, a local official told Reuters on Saturday.

"If it happens, it looks like it will be today - foreign and local (fighters)," Omar Alloush, a member of the Raqqa Civil Council, said, adding that the elders had already persuaded 100 Daesh fighters to surrender - something the remaining fighters had ruled out.

The U.S.-backed Syrian Democratic Forces (SDF), which is predominantly led by the PKK terror group's Syrian affiliate the Democratic Union Party (PYD) and its armed wing People's Protection Units (YPG), has been battling since June to defeat Daesh terrorists in Raqqa, which served as the terrorist group's de facto capital in Syria.