Next round of Astana talks on Syria set for Oct. 30-31, Kazakhstan says 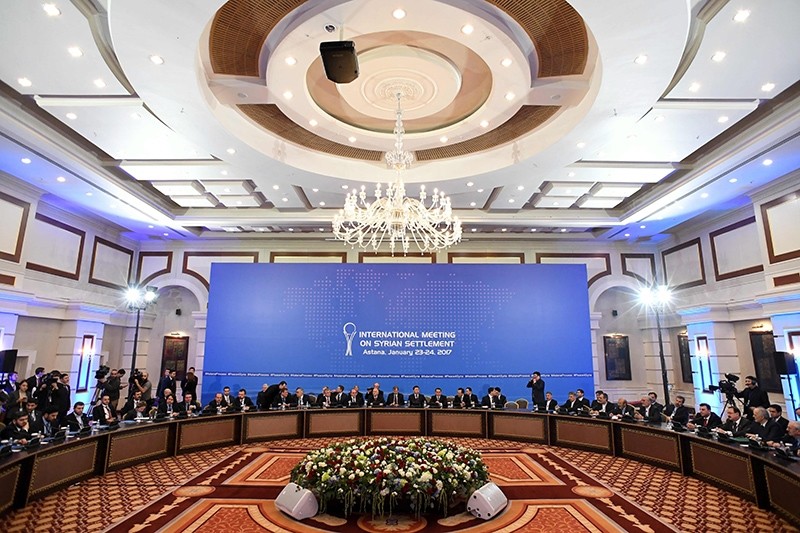 Representatives of the Assad regime and opposition groups along with other attendees take part in the first session of Syria peace talks at Rixos President Hotel, Astana, Kazakhstan, Jan. 23, 2017. (AP Photo)
by Daily Sabah with AFP Oct 19, 2017 12:00 am

Fresh talks on the Syria conflict will be held in Astana at the end of the month, Kazakhstan said Thursday, as part of a Turkey-backed push to end the six-year conflict.

The two-day meeting, which will take place Oct. 30-31 in the Kazakh capital, will be the seventh round of negotiations this year that are co-sponsored by regime backers Russia and Iran and opposition supporter Turkey.

"The guarantor states of the cessation of hostilities have agreed that the seventh round of high-level talks on Syria as part of the Astana process will be held on October 30-31," the Kazakh foreign ministry said in a statement.

The talks promote gradual cease-fires and de-escalation zones. At the last set of talks in September, the three powers agreed to allocate forces to patrol the zone covering opposition-held Idlib province and neighboring regions.

The guarantor states previously agreed to take all measures necessary to continue fighting Daesh, al-Nusra and other terrorist groups both within and beyond the de-escalation zones.

The diplomatic push brings together the Assad regime and representatives of the opposition, including some key armed groups who had previously steered clear of other negotiations.

Moscow has been spearheading the talks in a bid to pacify Syria after its game-changing intervention on the side of the regime.