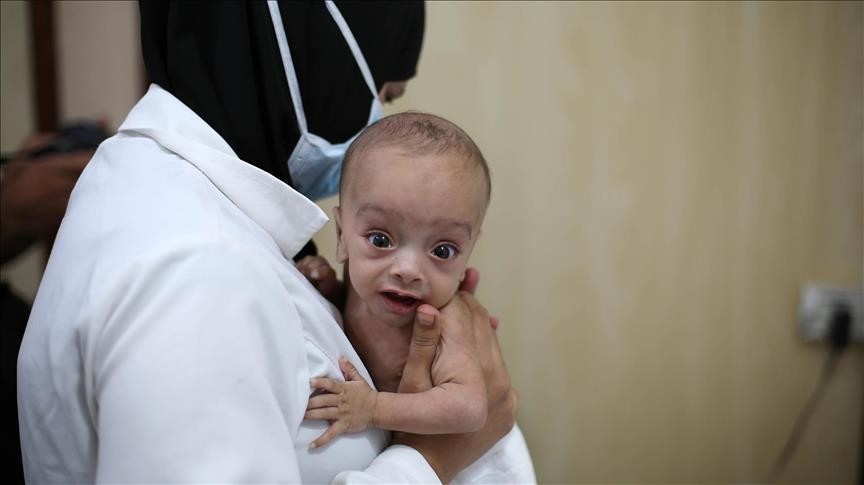 A Syrian baby is seen in doctor's arms as him and other babies go through medical examinations due to malnutrition in de-conflict zone of Eastern Ghouta of Damascus, Syria on October 14, 2017. (Anadolu Agency)
by Anadolu Agency Oct 22, 2017 12:00 am

A regime siege on Eastern Ghouta region of the Syrian capital, Damascus has caused two babies to breathe their last, according to local medics.

A main opposition stronghold on the outskirts of Damascus, Eastern Ghouta has been under siege by regime forces since December 2012. The blockade has left the area's 400,000 residents struggling with malnutrition and all healthcare facilities non-operational.

The regime tightened up its blockade in recent months, preventing residents from bringing in their daily needs through tunnels or intermediary merchants.

As a result, Sehar Difda, a one-month old baby, died of malnutrition on Sunday.

Local medic Dr. Yahya Abu Yahya told Anadolu Agency that the baby lacked nutrition as his mother had suffered from malnutrition due to the crippling siege.

An Anadolu Agency cameraman captured the last moments of the baby, who apparently looked weary and rather thin. He was buried by his family early Sunday.

"Infant death rates have dramatically increased due to lack of milk and enough food," the center said in a statement.

"Unfortunately, the medications were costly and not enough, meeting only %10 percent of our needs," he said.

He lamented that lack of enough food had caused the death toll of infants to increase in Eastern Ghouta. "One in four children suffers from malnutrition," he said.

Since then, hundreds of thousands of people have been killed and more than 10 million displaced, according to UN officials.