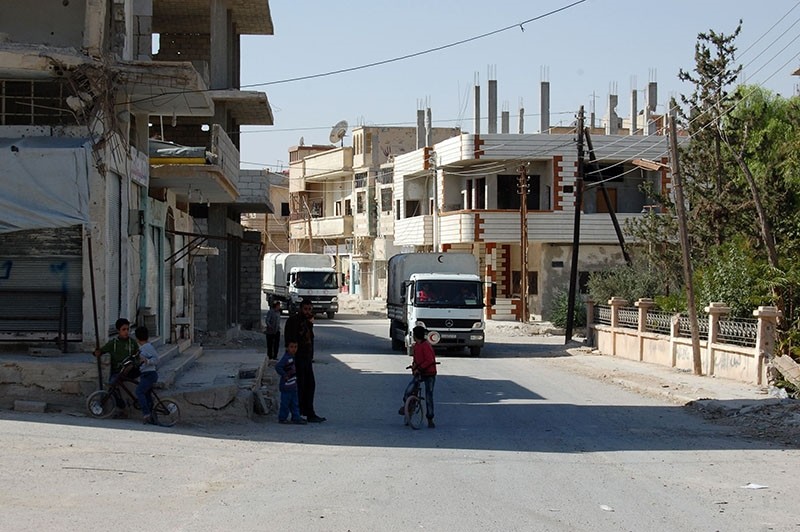 The Syrian Observatory for Human Rights said on Monday that Daesh killed at least 128 people in a Syrian town in central Homs over a three-week period before the Assad regime forces recaptured it on Saturday.

There was no immediate comment from regime officials or state media on the report by the Observatory, a Britain-based war monitor.

Some were shot in the street as Daesh militants retreated from the town, gunned down because they were suspected of working with the regime, according to activists.

The head of the Observatory, Rami Abdurrahman, sad that what happened in the town was a "massacre."

The activist-run Palmyra Coordination Committee published the names of 67 civilians confirmed killed and also said the number was likely to rise. It said at least 35 were found shot and dumped into a deep shaft.

Earlier this month, the Observatory said Daesh fighters had seized the town from government forces, part of a counter-attack by the terrorists who have come under intense pressure in eastern Syria.

At least 83 people were killed in the 48 hours before the regime forces retook the town, the war monitor said, adding that Daesh had accused the civilians of being "agents of the regime".

The Observatory also said it documented at least 12 killed at the hands of pro-regime troops after they regained control of the town.

The town lies nearly 300 km (190 miles) from Deir al-Zour city in the east, the current focus of the government offensive, with Russian jets and Iran-backed militias, against Daesh.

Daesh militants first seized Qaryatayn in August 2015, and relied on the strategically located town to defend another of their bastions, the historic city of Palmyra. At the time, thousands of the town's Christian residents fled, fearing the terrorist group's brutality.

With Russian backing, regime troops regained control of the town in April 2016. But Daesh, facing major setbacks around Syria and Iraq, launched a new attack on the town in late September and recaptured it.

At the time, Russia accused the United States, which is battling the Daesh group, of looking the other way and allowing IS to attack Qaryatayn.

Most of the Daesh militants who were involved in attacks on the town were local residents. Pro-regime media blamed the loss of Qaryatayn for the second time on what it described as militant "sleeper cells."