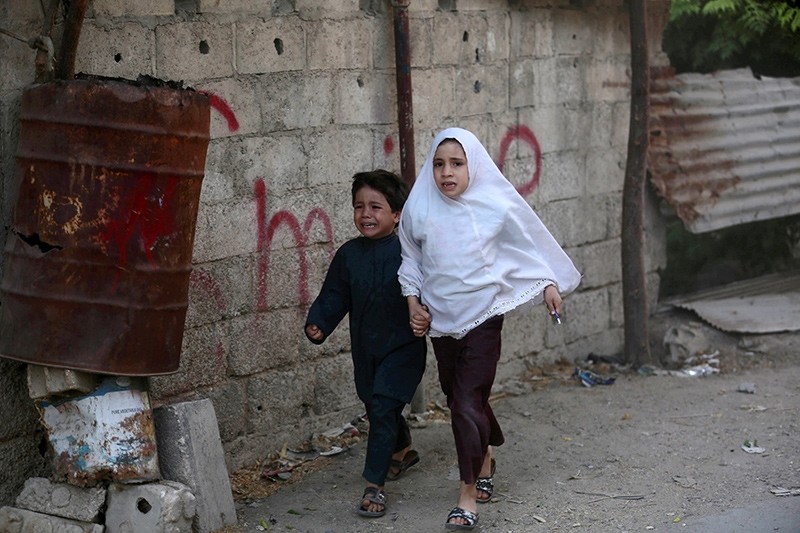 Syrian children run for cover following a reported airstrike on Kafr Batna, in the opposition-held Eastern Ghouta area, on the outskirts of the capital Damascus (AFP Photo)
by Compiled from Wire Services Oct 24, 2017 12:00 am

Syrian opposition activists say malnutrition and shortages in medicine are increasing the suffering in besieged, opposition-held eastern suburbs of the Syrian capital Damascus, adding that two children have died as a result in the past two months.

The activists blame a four-year Assad regime siege and greed by local businessmen who hide food and medical products in orders to raise the prices, for the malnutrition mostly among children.

The crisis in the suburbs, also known as eastern Ghouta have worsened since May after regime forces seized the Qaboun and Barzeh neighborhoods in northeast Damascus. The two neighborhoods were hubs for smuggling supplies into the Ghouta region through tunnels.

International aid organizations have been sending food to Ghouta, home to tens of thousands, but the last convoy entered more than a month ago.

Rami Abdurrahman of the Britain-based Syrian Observatory for Human Rights said the main reason behind the suffering is the regime siege, adding that there are businessmen who are taking advantage of the food shortage.

Ahmad Khansour, a Ghouta-based opposition activist, said via text messages that high prices are far beyond people's reach, saying that a kilogram (2.2 pounds) of sugar is selling for up to $12 while a kilogram of rice sells for nearly 5$. He said the family's monthly income is about $100.

In a statement released Tuesday, the Syrian Network for Human Rights (SNHR) said the fatalities included 206 children and 67 women.

The NGO said regime forces had launched a military operation in eastern Damascus in February and shut underground tunnels used to smuggle foodstuffs to civilians in Eastern Ghouta.

"This has caused a scarcity in foodstuffs in the area," it added.

Founded in 2011, the SNHR is a non-governmental independent organization that is a primary source for the United Nations on all death toll-related statistics in Syria, according to its official website.