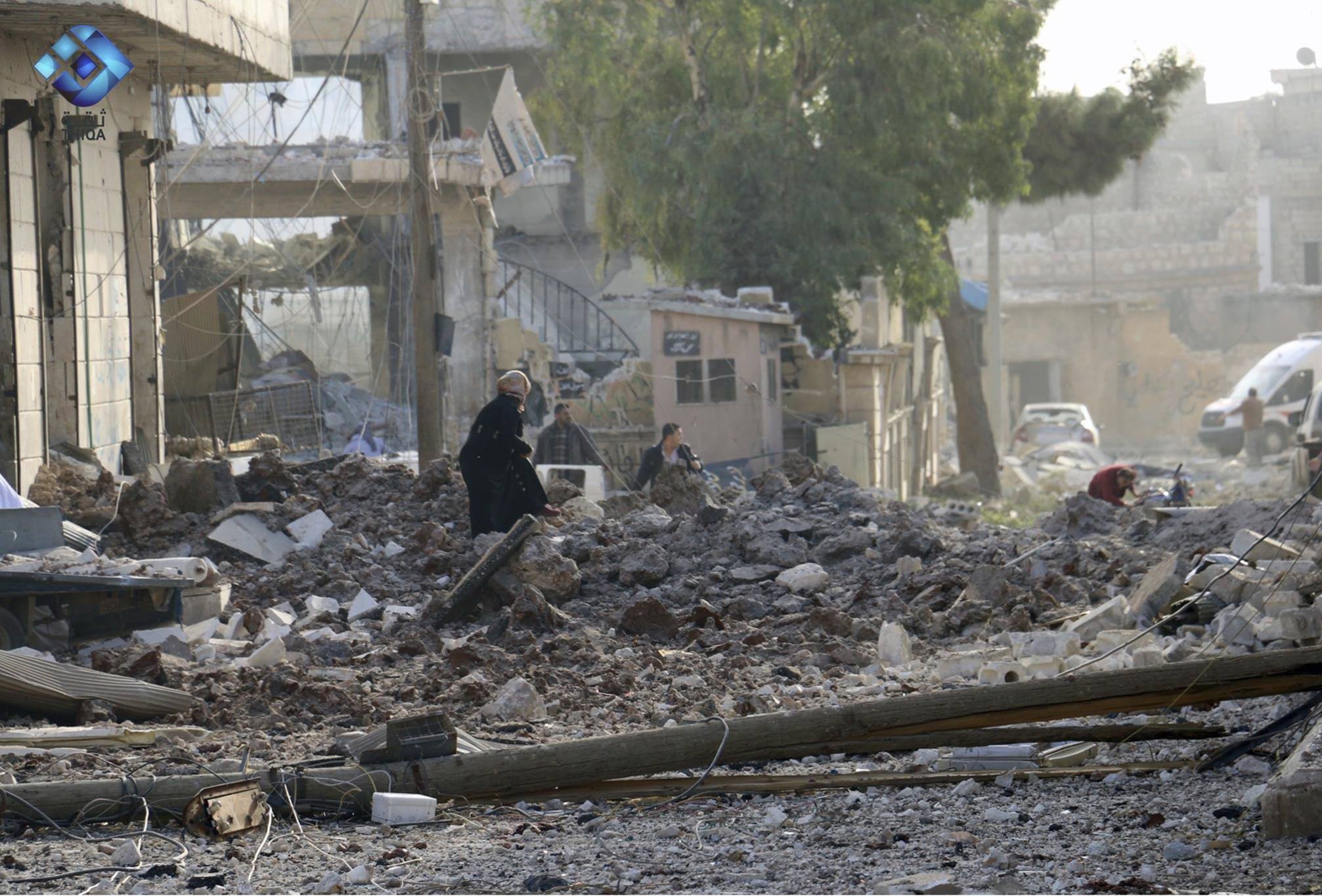 This image shows people inspecting damage from airstrikes on Atareb, in the opposition-held countryside outside Aleppo Syria, Monday, Nov. 13, 2017. (Thiqa News via AP)
by Compiled from Wire Services
Nov 13, 2017 12:00 am

A Syrian war monitoring group on Tuesday raised the death toll from airstrikes on a market in a northern, opposition-held town in Syria the previous day to 61 as rescue workers continued searching for victims buried under the rubble.

According to the Britain-based Syrian Observatory for Human Rights, there were at least three airstrikes on the market in the town of Atareb.

Atareb and the countryside around it remain outside the control of the Assad regime in Damascus. Regime forces retook the nearby city of Aleppo, Syria's largest, following a ferocious assault on the opposition-held neighborhoods there in 2015.

The town population has swelled with the arrival of Syrians fleeing from the fighting elsewhere in the country's north. Atarab's market drew not just the townspeople but also shoppers from the countryside and nearby villages.

"You can see the body fragments in the rubble," said Yasser Hmeish, a medical technician at the scene. "This morning I saw civilians and rescue workers trying to lift the cement chunks to find the missing."

"There were restaurants, mobile phone shops, butchers: it was a market in the full sense of the word," Hmeish added. "It's been completely destroyed."

The airstrikes ripped through the market, crushed buildings and damaged an adjacent traffic police station. Survivors found limbs in the rubble and corpses with their heads crushed by the pressure of the blasts.

The Syrian Civil Defense search-and-rescue volunteers, popularly known as the White Helmets, told The Associated Press they gave up hope of finding more survivors after dawn on Tuesday but were continuing recovery operations.

The Observatory said it couldn't determine whether Russia or the Syrian government was behind the attack. The opposition Syrian National Coalition accused Russia, Bashar Assad's chief military backer.

The attack was the latest breach in a "de-escalation" agreement mediated by Russia that sought to protect the civilian population but that has largely proven unenforceable.

Syria's civil war, now in its seventh year, has killed at least 400,000 people and displaced 11 million — half of Syria's pre-war population.