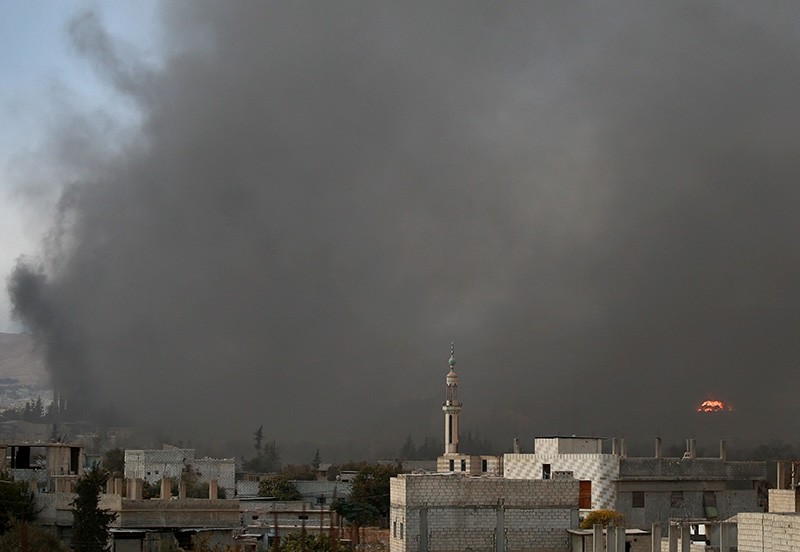 Smoke rises following an air strike on the opposition-held besieged town of Harasta, in the Eastern Ghouta region on the outskirts of Damascus, on November 20, 2017 (AFP Photo)
by Compiled from Wire Services Nov 22, 2017 12:00 am

The World Health Organization says Syrian health officials have reported that 84 people have been killed and another 659 injured over a four-day stretch of intensified fighting in a region near the capital, Damascus.

The U.N. health agency said the casualties occurred between Nov. 14 to Nov. 17 in clashes between opposition fighters and forces that support the Assad regime in the eastern Ghouta region. The area on the outskirts of Damascus has been under a regime siege for more than four years.

Seventeen children and six women were among those killed.

The agency also said in a statement Wednesday that more than 200 operations were conducted in eastern Ghouta despite blockages that have prevented deliveries of humanitarian aid including life-saving medicines, medical equipment, and surgical supplies.

Civil-defense units reportedly rushed to the scene of the attacks to treat the injured and transport them to lcoal hospitals.

Regime forces have recently stepped up their attacks on Eastern Ghouta, even though the district falls within a network of de-escalation zones -- endorsed by Turkey, Russia and Iran -- in which acts of aggression are prohibited.

Over the course of the past week, regime forces have carried out repeated attacks on the district, leaving dozens of civilian residents dead or injured.

Since then, hundreds of thousands of people have been killed in the fighting and more than 10 million have been displaced, according to to the U.N.