US intends to maintain military presence in Syria after Daesh defeat 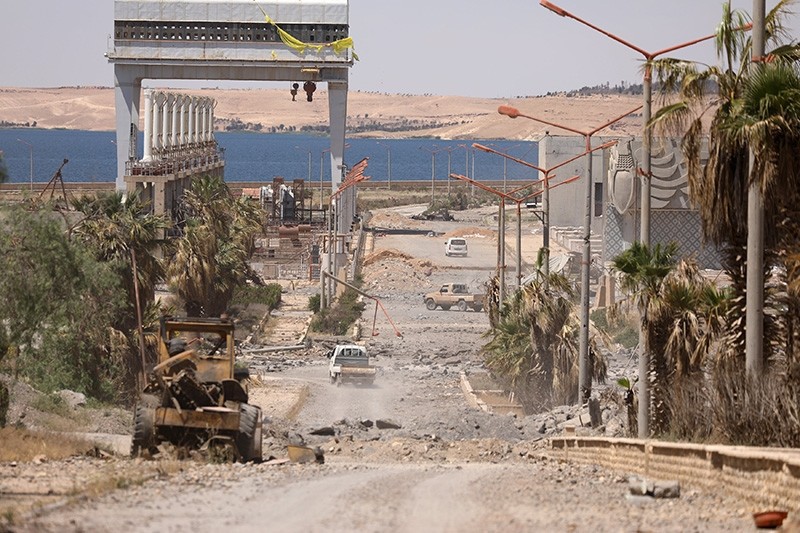 Vehicles drive near Tabqa Dam on the Euphrates River, in the town of Tabqa, after U.S.-backed Syrian Democratic Forces (SDF) captured it from Daesh terrorists this week, Syria May 12, 2017. (Reuters Photo)
by daily sabah
Nov 23, 2017 12:00 am

Future plans of the United States regarding the Syrian crisis include maintaining a military presence in the country and establishing a new local government in areas where the U.S.-backed Syrian Democratic Forces (SDF), which is predominantly led by the PKK's Syrian affiliate People's Protection Units (YPG), have been trained, The Washington Post reported Wednesday.

According to the U.S. daily, the Trump administration does not want to leave the stage to the Assad regime after the Daesh terror group is completely defeated in the country.

This intention was interpreted in the piece as a "potentially open-ended commitment that could draw the U.S. into conflict with both Syria and Iran."

The Washington Post also cited U.S. officials as saying that the current presence in Syria would be used in favor of the SDF, fearing that an "abrupt withdrawal" could lead to the Assad regime's political survival.

U.S. Defense Secretary Jim Mattis also said last week that the country intended to set the right conditions for a "diplomatic solution" in the area.

"We're not just going to walk away right now," he added.

According to official figures, 503 U.S. soldiers are currently stationed in Syria with the aim of training the PKK's Syrian offshoot-dominated SDF. However, experts claim that the actual number is much higher.

Meanwhile on Wednesday, Turkey, Iran and Russia agreed on holding a Syrian People's Congress to find a permanent solution to the Syrian crisis during a trilateral meeting in the coastal Russian city of Sochi.

Turkey, Russia and Iran are the guarantor countries that brokered a cease-fire in Syria in December 2016, leading to the Astana talks, which are running parallel to the Geneva talks for peace in Syria. The three countries have carried out negotiations in the Kazakh capital since then and agreed on the formation of five de-escalation zones in Syria.

Syria has been locked in a deadly civil war since early 2011, after the Assad regime cracked down on pro-democracy protests with brutality, leading to the death of thousands of people and to the displacement of more than 10 million others.