17 civilians killed, 60 others injured in airstrikes in Syria's Eastern Ghouta 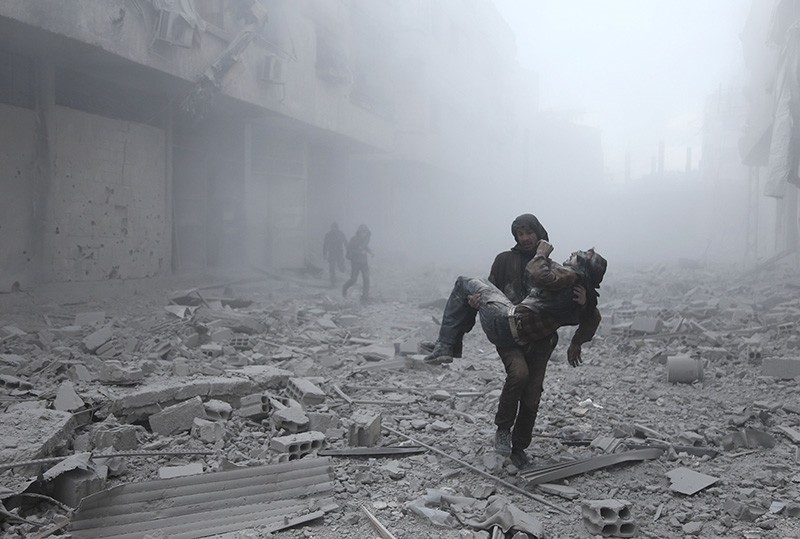 A wounded man is carried following an air strike on the rebel-held besieged town of Arbin, in the eastern Ghouta region on the outskirts of the capital Damascus on January 2, 2018. (AFP Photo)
by Compiled from Wire Services Jan 06, 2018 12:00 am

Airstrikes on the opposition-held Syrian region of Eastern Ghouta, on the outskirts of the capital Damascus, killed 17 civilians and wounded 60 others on Saturday, a monitor said.

Syrian and Russian warplanes carried out the airstrikes that targeted Hammuriyeh, Arbeen, Harasta and Madira, the head of the Britain-based Syrian Observatory for Human Rights, Rami Abdel Rahman, told dpa.

An AFP reporter in Hammuriyeh saw residential buildings with their facades blown open, collapsing into streets strewn with rubble.

Residents including members of the White Helmets rescue group rushed to rescue the wounded.

Running past a burning car, one man held a crying boy in his arms, while another carried the apparently lifeless body of a child through the streets.

The Britain-based monitor relies on a network of sources inside Syria and says it determines whose planes carry out raids according to type, location, flight patterns and munitions used.

More than 340,000 people have been killed in Syria and millions displaced since the conflict began in March 2011 with anti-regime protests.