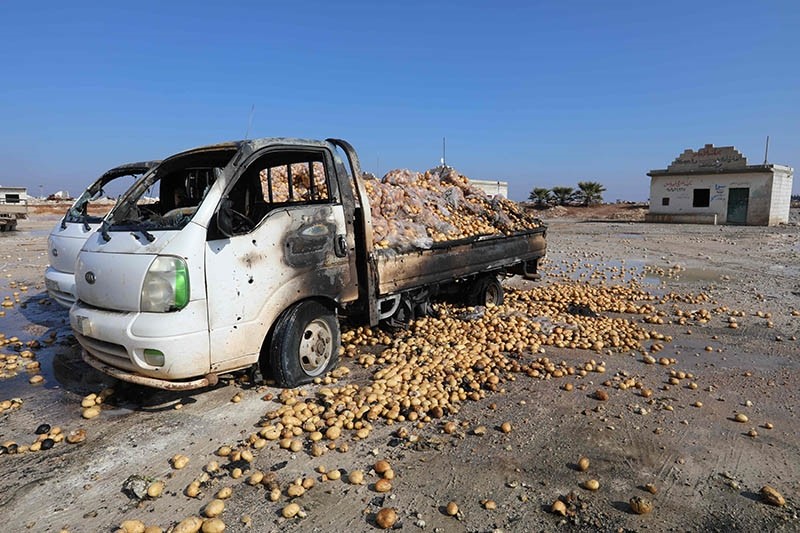 This picture taken Jan. 29, 2018 shows trucks loaded with potatoes standing abandoned after their windows were blasted from their frames following airstrikes by Assad regime forces which hit a vegetable market in Saraqeb, Idlib, Syria. (AFP Photo)
by Daily Sabah with Agencies Feb 01, 2018 12:00 am

The Assad regime forces pushed into an opposition stronghold of Idlib on Thursday despite a ceasefire agreement brokered by Turkey, Russia and Iran.

The regime troops and allied militia forces moved within 14 kilometers (9 miles) of the town of Saraqeb, in Idlib, the opposition's largest stronghold in the country, a war monitoring group reported.

The Assad regime leveraged its monopoly on air power to carve a path deep inside Idlib to reach the Abu Dhuhour air base, 26 kilometers (16 miles) southeast of Saraqeb, last month. It then started marching toward Saraqeb, an important military center for the opposition in control of Idlib.

The opposition has limited anti-aircraft capabilities.

Meanwhile, U.N. humanitarian adviser Jan Egeland called on Russia, Turkey and Iran to de-escalate the fighting in Idlib, which he said was "screaming for a ceasefire".

"When we need their ability to influence the parties the most, in this bleak hour for humanitarian work, humanitarian diplomacy seems to be totally impotent. We're getting nowhere at the moment," Egeland said.

The three guarantor countries in Astana peace process — Turkey, Russia and Iran — agreed to establish a so-called de-escalation zone in Idlib. As part of the agreement, Turkish forces were deployed to Idlib to monitor the process through a number of military posts set up across the province.

Turkey repeatedly warmed that the Assad regime's violations of ceasefire in Idlib threaten the whole peace process and called on Russia and Iran, the regime's main backers, to pressure Assad forces to stop the offensive.