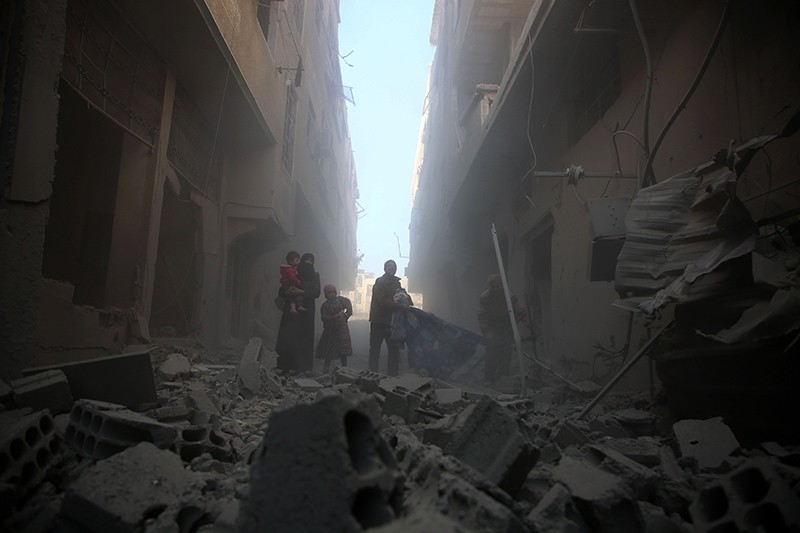 A family walks through a street covered with rubble from a heavily damaged building following airstrikes by the Assad regime forces on Arbin, in the opposition-held Eastern Ghouta region on the outskirts of Damascus, Syria, Feb. 1, 2018. (AFP Photo)
by Compiled from Wire Services Feb 06, 2018 12:00 am

The United Nations is calling for an immediate, monthlong cease-fire in Syria in order to deliver critical humanitarian aid and medical care to civilians trapped by fighting in regions across the country.

The U.N. mission in Syria warned in a statement on Tuesday of "dire consequences" to the compounded humanitarian crises in the country. It identified seven areas requiring urgent humanitarian relief. It says it's blocked from reaching them due to fighting and forces manning the front lines.

Syria's multi-sided war has drawn in armies and insurgents from around the world, aggravating a conflict which began as an uprising against the regime of Bashar Assad's rule.

Though Assad appears to have survived the insurgency, his forces continue to bomb and besiege opposition pockets around the country.

Separately, U.N. war crimes experts said in Geneva that they were investigating multiple reports of bombs allegedly containing banned chlorine being used against civilians in the opposition-held towns of Saraqeb in the northwestern province of Idlib and Douma in Eastern Ghouta near Damascus.

In a statement, Paulo Pinheiro, head of the International Commission of Inquiry on Syria, said an ongoing Assad regime siege of Eastern Ghouta "involve(s) the international crimes of indiscriminate bombardment and deliberate starvation of the civilian population".

Reports of air strikes hitting at least three hospitals in the past 48 hours "make a mockery of so-called "de-escalation zones", Pinheiro said, referring to a Russian-led truce deal for opposition-held territory that has failed to stop fighting there.

The latest air strikes killed 25 people in the Eastern Ghouta suburbs of Damascus, a day after bombardments of the same pocket killed 30 people, according to the Syrian Observatory for Human Rights. Air strikes in opposition-held Idlib killed six.

The U.N. says it has a plan to reach 700,000 people with relief in the next two months, if it can get the permission to proceed.