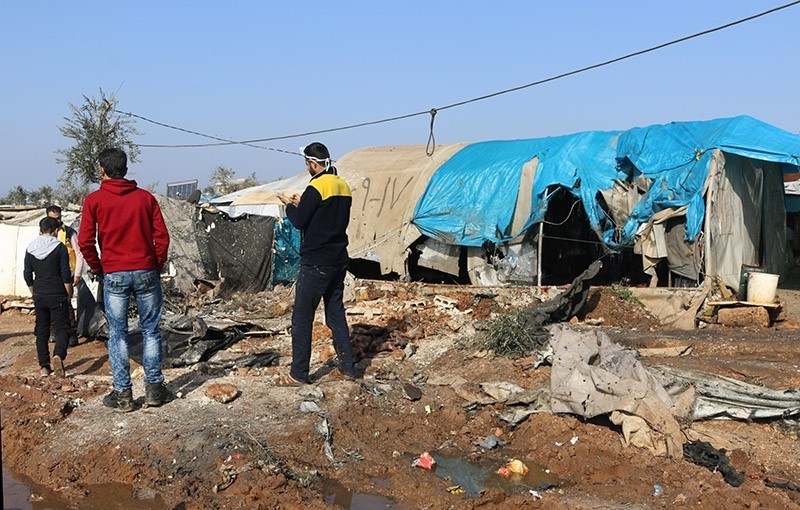 The terrorists targeted the Atmeh refugee camp in northern Idlib at 11:00 a.m. local time, striking panic among its residents.

The wounded refugees were brought to nearby hospitals for medical treatment.

Several refugee camps merged into the Atmeh camp in 2011, when thousands were forced to leave their homes due to the vicious civil war in Syria, which started after the Assad regime cracked down on pro-democracy protests with unexpected violence.

On Sunday, terrorists launched another rocket targeting civilians in a refugee camp in Aleppo's Azaz district. The rocket landed in an empty area bordering Turkey's Kilis province, according to an AA correspondent on the ground.

No casualties were reported but the attack caused panic in nearby camps, where around 200,000 refugees live.

On Monday, another rocket attack on Azaz that came from Afrin, killed one civilian and injured five others.

The PYD often targets civilians in Azaz while it also threatens the entire area that was captured during Operation Euphrates Shield as well as the Idlib de-escalation zone.

Central Kilis and a large part of Hatay are also under PYD fire due to their geographical location.

Since the beginning of Operation Olive Branch on Jan. 20, the terrorist organization has increased its attacks in both Hatay and Kilis, causing countless civilian deaths.

As many as 94 rockets have been fired by the YPG since the beginning of the operation, Prime Minister Binali Yıldırım confirmed Sunday.

Sixty rockets targeted Hatay and 34 landed in Kilis, both border provinces to Syria, Yıldırım said during his visit to the Kilis governor's office.

"Seven civilians have been killed and 113 people have been injured," the prime minister said.

Five of the seven civilians killed by YPG rockets were in Hatay province while the other two were in Kilis.

Turkey is continuing Operation Olive Branch, launched Jan. 20 to remove the PKK/PYD/YPG/KCK and Daesh terrorists from the Afrin region.