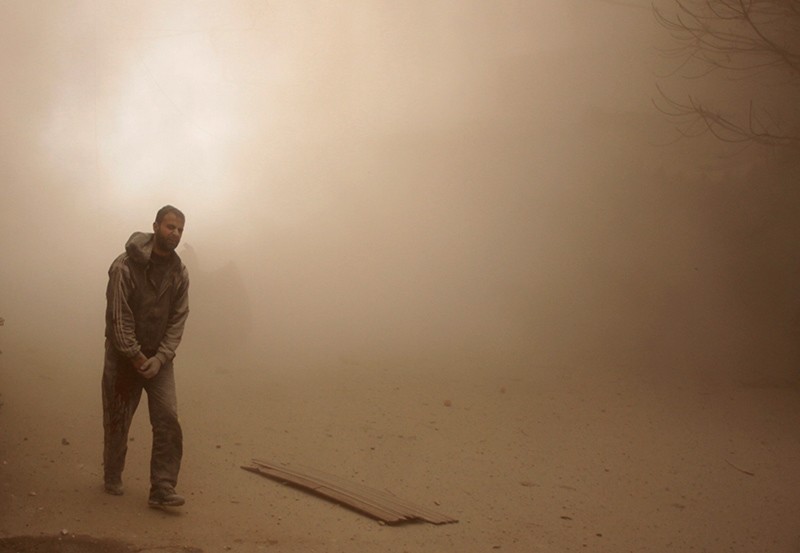 A man walks in the dust following Assad regime airstrikes on the opposition-held besieged town of Douma in the eastern Ghouta region, on the outskirts of the capital Damascus, Syria, Feb. 7, 2018. (AFP Photo)
by Daily Sabah with Wires Feb 08, 2018 12:00 am

The highest toll from morning strikes was in the town of Jisreen, where eight civilians were killed. Another 17 were killed there later in the day.

In the afternoon, 19 civilians were killed in Arbin, according to sources from Syrian Civil Defense.

In the aftermath of the raid on Saqba, a French Press Agency (AFP) correspondent saw damaged storefronts and streets littered with human remains and destroyed cars.

A man carrying his young daughter was screaming for an ambulance to take her to the nearest makeshift clinic.

Civilian Defense forces, also known as the White Helmets, were dispatched to the scene for search and rescue as death toll was feared to increase.

Assad regime warplanes have ratcheted up their bombardment of Eastern Ghouta since Monday, leaving dozens dead and hundreds in need of medical care.

Eastern Ghouta lies just east of the capital Damascus. An estimated 400,000 people live under a suffocating five-year regime-imposed siege, which has made food and medicine nearly impossible to access. Thousands are awaiting evacuation, suffering from severe hunger and illnesses.

Eastern Ghouta was declared a de-escalation zone in which acts of aggression are forbidden.

The Syrian regime, however, has repeatedly violated the deal and has targeted residential areas in the city killing a total of 503 people and leaving around 2,000 others injured since Dec. 29, 2017.

Syria has been locked in a devastating civil war since March 2011, when the Assad regime cracked down on pro-democracy protests with unexpected ferocity.

While U.N. officials say hundreds of thousands of people have been killed in the conflict, regime officials say the death toll is closer to 10,000.