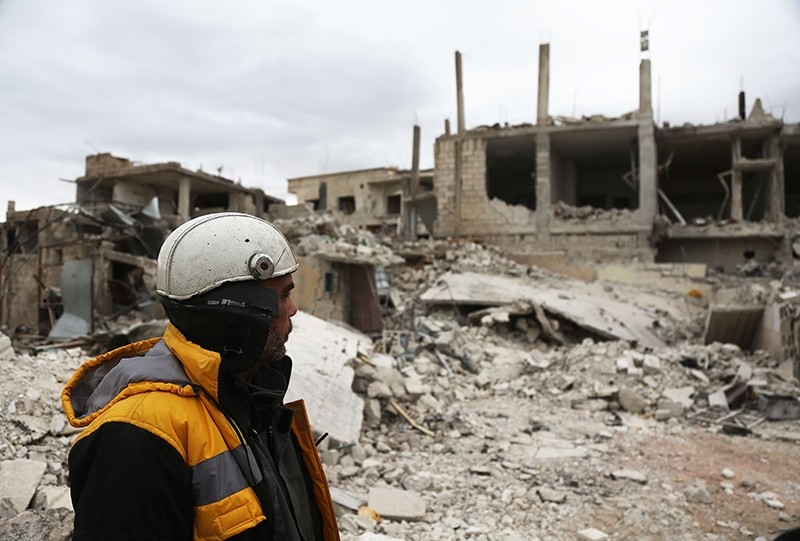 A White Helmets rescue worker looks out at destroyed buildings in the town of Medeira in Syria's opposition-held eastern Ghouta area on February 12, 2018. (AFP Photo)
by Compiled from Wire Services Feb 14, 2018 12:00 am

The United Nations said Wednesday the first humanitarian convoy in months has entered a besieged suburb east of the Syrian capital carrying aid and food supplies to some 7,000 people.

The convoy entered Nashabiyah, a town about 19 kilometers (12 miles) east of Damascus, and is one of a number of towns in the besieged eastern Ghouta area. It is the first humanitarian aid convoy to enter the region, controlled by the Syrian opposition and home to nearly 400,000 residents, since the end of November.

"It is way overdue," said Linda Tom, of the U.N. Office for the Coordination of Humanitarian Affairs, in Damascus.

The Assad regime has not been granting permission for such convoys. Meanwhile, regime troops have intensified a military campaign against eastern Ghouta, renewing a push to seize the area held by the opposition since 2012.

The U.N. had warned of catastrophic conditions in eastern Ghouta, calling for a cease-fire to allow aid. But the military offensive continued.

Earlier this month, eastern Ghouta was the target of regime airstrikes that killed at least 250 civilians, according to Britain-based Syrian Observatory for Human Rights. Calm has prevailed in the region over the past 72 hours, the watchdog said.

Meanwhile, French President Emmanuel Macron said he will order strikes in Syria if there is "proven evidence" that Bashar Assad's regime used chemical weapons against civilians.

He acknowledged that French intelligence services don't currently have the necessary proof.

Since the beginning of the year, there have been reports of suspected chlorine attacks in Syria — including in eastern Ghouta and in opposition-held Idlib in late January and February. Several were treated for breathing problems.

Meanwhile, the U.N. Security Council is considering a draft resolution demanding a 30-day ceasefire in Syria to allow for urgent deliveries of humanitarian aid.

Sweden and Kuwait presented the draft, which would also demand an immediate end to sieges, including on eastern Ghouta, after regime ally Russia last week rejected as "not realistic" a similar appeal by U.N. aid officials.