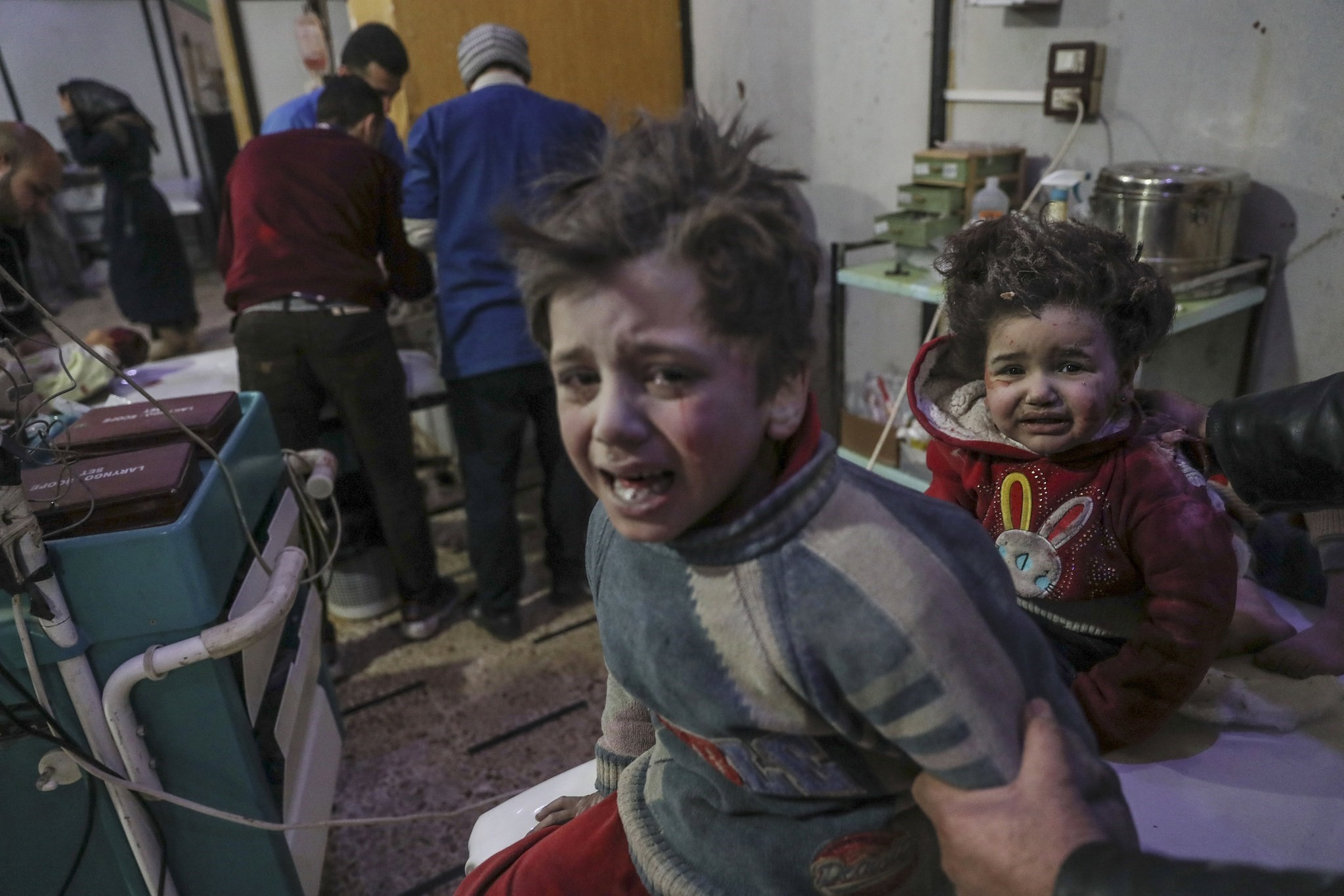 Injured children are treated at a hospital in opposition-held Douma, Eastern Ghouta, Syria, February 19, 2018. (EPAPhoto)
by Compiled from Wire Services Feb 20, 2018 12:00 am

The bombardment of Syria's opposition-held eastern Ghouta area near Damascus by pro-Assad forces has killed 250 people in the 48 hours since Sunday night, the Syrian Observatory for Human Rights said on Tuesday.

The Britain-based war monitor said this was the highest 48-hour death toll since a 2013 chemical attack on the besieged enclave, which killed hundreds.

The Observatory said 106 people had been killed by bombardment on Tuesday.

Meanwhile the observatory said Monday's bombardment killed nearly 100 people and saw the use of warplanes, helicopter gunships, missiles as well as artillery.

It was the deadliest days in eastern Ghouta since 2015, adding that 20 children and 15 women were among those killed.

The opposition-affiliated Syrian Civil Defense, also known as White Helmets, said the shelling and airstrikes killed 98 and that some people are still under the rubble. It said the dead included one of the rescue group's members, Firas Jomaa.

The Observatory said the "crazy shelling" appears to be paving the way for a wide ground offensive on eastern Ghouta. If captured by regime forces it would be another major victory for Assad since the conflict began seven years ago.

The United Nations called for an immediate ceasefire in the area on Monday, saying the situation was "spiraling out of control" after an "extreme escalation in hostilities".

The violence in eastern Ghouta is part of a wider escalation in warfare on several fronts in Syria in recent months as Bashar Assad pushes to end the seven-year rebellion against him.

Assad's most powerful ally, Russia, has been pushing a diplomatic track at the same time as the increase in fighting, resulting in the establishment of several "de-escalation zones".

Eastern Ghouta is in one of these areas, where violence is meant to be contained, but the agreement does not include a former al Qaeda affiliate which has a small presence there.

Other insurgent and opposition groups in eastern Ghouta, say the Syrian regime and Russia are using the extremist presence as a pretext to continue their bombardment.

Neither the Syrian military nor Russia commented on the renewed bombardment in eastern Ghouta, but they have often said they do not target civilians.

The Observatory said the intensified bombing was in preparation for a pro-regime ground offensive against the enclave and that an opposition group there had foiled an attempt by the Syrian regime's army to advance at al-Marj overnight.