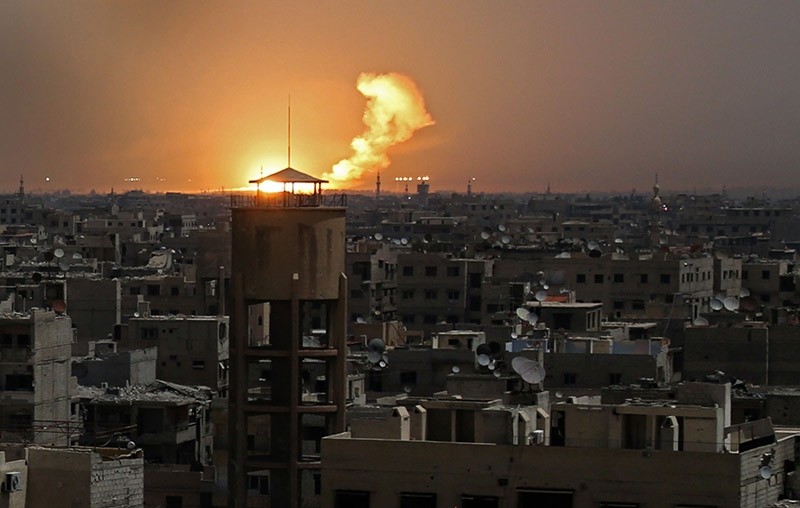 A picture taken on February 28, 2018 shows flames erupting in the horizon following a reported rocket attack in the rebel-held enclave of eastern Ghouta on the outskirts of the Syrian capital Damascus. (AFP Photo)
by Mar 01, 2018 12:00 am

An elderly Pakistani man and his wife have fled Syria's embattled eastern Ghouta, the Red Crescent said Thursday, the only known civilians to have left since a "humanitarian pause" took effect.

The opposition enclave outside Damascus has seen some of the worst bombardment and fighting of the Syrian civil war since Russia-backed regime forces launched an assault on February 18.

The evacuation comes after a "humanitarian pause" announced by Russia came into effect on Tuesday following days of air strikes and clashes that killed 600 civilians.

"An elderly Pakistani couple were evacuated on Wednesday afternoon from eastern Ghouta," a medical source with the Syrian Arab Red Crescent said.

The Syrian Observatory for Human Rights, a Britain-based monitor, said the couple were the only people among the besieged enclave's 400,000 residents to have left since the "humanitarian pause" started on Tuesday.

Russia this week ordered the daily five-hour pause in the enclave and said it was guaranteeing civilians safe passage to flee.

But Observatory head Rami Abdel Rahman said the Pakistani couple were leaving the enclave not because of "this pause" but as a result of months of negotiations by the Pakistani embassy.

Mohammad Fadhl Akram, 73, and his wife Saghran Bibi were evacuated to Damascus.

But they had to leave his two sons, three daughters and 12 grandchildren behind, he told AFP in the eastern Ghouta town of Douma before leaving.

"I hope God protects them," said Akram, who wore a warm hat and sported a trimmed white beard.

"I don't want anything else."

Eastern Ghouta has been under siege by regime forces since 2013, with residents facing severe food and medical shortages even before the latest assault.

The Russian announcement fell far short of a full 30-day ceasefire voted for by the United Nations Security Council that has yet to be implemented.

Dozens of trucks loaded with relief supplies have been unable to enter the enclave.

More than 340,000 people have been killed since the civil war started in 2011 with the brutal repression of anti-government protests.