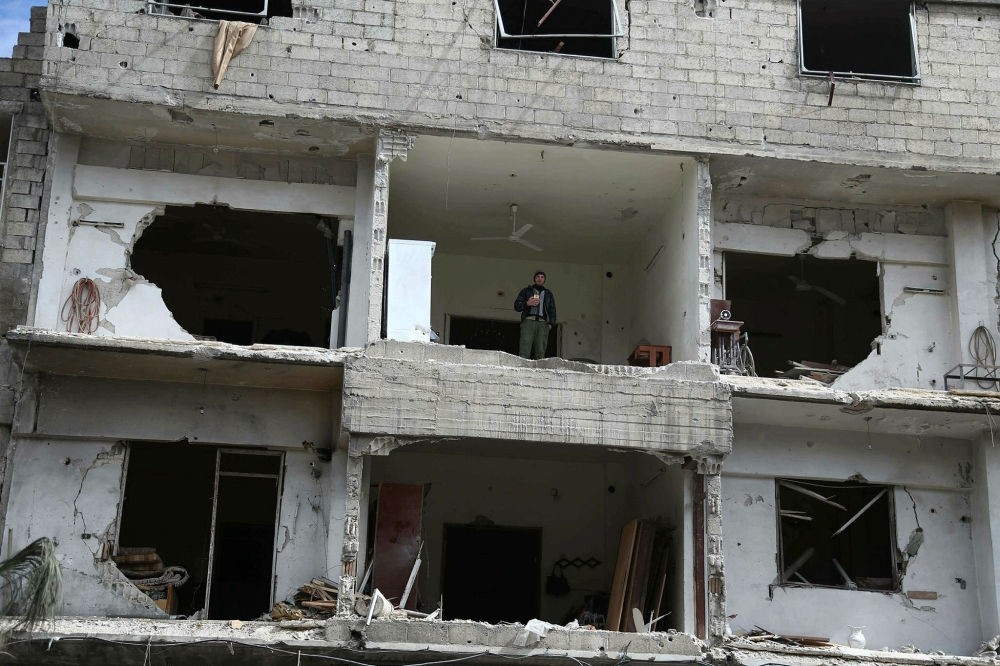 A Syrian man stands inside a damaged building in the opposition-held town of Hamouria, Eastern Ghouta, Feb. 27.
by Compiled from Wire Services Mar 01, 2018 12:00 am

Syrian regime forces continue to clash with the opposition on the outskirts of Eastern Ghouta despite a humanitarian pause announced by Russia on the second day of a U.N.-sponsored cease-fire

Despite a U.N. ceasefire meant to provide a respite from a barrage of Assad regime attacks, Syrian regime forces clashed with the opposition on the outskirts of Eastern Ghouta. The Britain-based Syrian Observatory for Human Rights said the fighting was fierce and broke out overnight in the opposition-held enclave on the eastern outskirts of the capital Damascus.

Opposition groups and civilian institutions in Syria's Eastern Ghouta district have told the U.N. that individuals linked to certain armed groups would be expelled from the region within 15 days of the implementation of an U.N.-backed ceasefire, according to Anadolu Agency (AA).

In a letter sent to the U.N., the largest armed opposition groups in Eastern Ghouta, including Jaish al-Islam, Faylaq al-Rahman and Ahrar al-Sham, along with several civilian institutions, voiced support for U.N. Security Council Resolution 2401.

Adopted unanimously on Saturday, the resolution calls for a 30-day ceasefire in Eastern Ghouta to allow the delivery of badly needed humanitarian aid.

In the letter, a copy of which was obtained by AA, opposition groups and civilian institutions expressed commitment to cooperating with the U.N. to remove individuals linked to certain armed groups from Eastern Ghouta along with their families within 15 days of the ceasefire's implementation.

The letter also addressed Eastern Ghouta's dire humanitarian situation, saying that opposition groups would facilitate and ensure the safety of aid convoys bound for the besieged Damascus suburb. It also called for an end to Russian airstrikes and attacks by the Assad regime and its allies on opposition-held parts of Eastern Ghouta and for the transport of injured people to hospitals abroad for treatment.

Forces loyal to Bashar al-Assad have been besieging almost 400,000 civilians trapped inside Eastern Ghouta for years, but the siege has tightened this year, and attacks on the enclave have intensified. Siege tactics and indiscriminate attacks on civilian areas contravene internationally agreed "rules of war." The besieged enclave, just east of the capital, is supposed to be one of four de-escalation zones declared last year in a bid to reduce the bloodshed.

The European Union's top diplomat has written to the foreign ministers of Russia, Iran and Turkey urging them to uphold a ceasefire in Eastern Ghouta and allow aid into besieged areas.

Appealing to the trio as the leaders of the Syrian peace talks in the Kazakh capital Astana, EU foreign policy chief Federica Mogherini called on them to "implement a genuine humanitarian pause for at least 30 consecutive days throughout Syria," as reported by Reuters. In the Feb. 26 letter seen by Reuters, Mogherini also urged Russia, Turkey and Iran to "take all necessary steps to ensure that the fighting stops, that the Syrian people are protected, and finally that urgent humanitarian access and necessary medical evacuations are taking place."