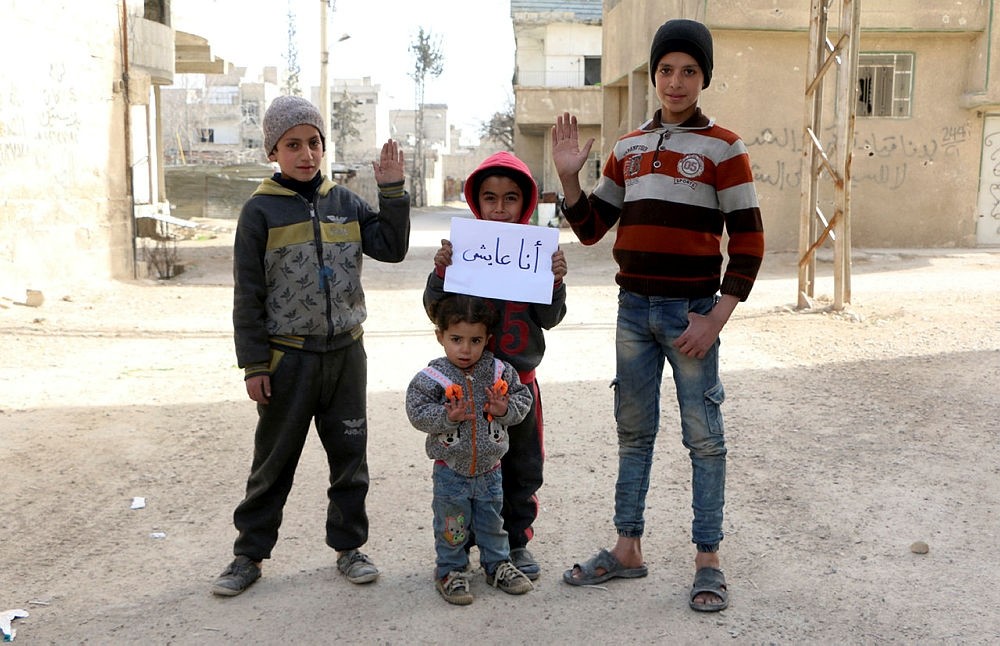 The images coming from the besieged eastern Ghouta have sparked a global campaign of solidarity for the Syrian children trapped inside the opposition-held enclave as regime attacks continue.

Activists in eastern Ghouta started to post their own pictures and their children with one arm raised with the hashtag Iamstillalive on social media.

The campaign inspired many others quickly to respond around the world.

The attacks carried out by the Assad regime and its supporters in Eastern Ghouta have killed 127 children in the past 12 days, according to the White Helmets civil defense group's report.

The attacks continue despite a cease-fire in the region.

On Monday, Russian President Vladimir Putin ordered a daily pause to airstrikes in the besieged area from 9 a.m. to 2 p.m. (0600GMT to 1100GMT) to allow civilian and medical evacuation.

Speaking to Anadolu Agency, Eymen, a child in Eastern Ghouta, said he was grateful to be alive.

"They say there is a cease-fire between 09 a.m.-2 p.m. but they are lying. They are shooting in the middle of the cease-fire. Everyone is lying to us, we are starving to death, we sleep with distress and wake up with it," he said.

"We are tired, we are trying to live under starvation," said Isam, another child from the region.

"The airstrikes hit us but thank God I survived," said Abdul Qayyum, another child who was injured in a regime attack.

Eastern Ghouta, which is home to 400,000 people, has been under siege for the last five years and humanitarian access to the area has been completely cut off.

In the past eight months, Assad regime forces have intensified their siege of Eastern Ghouta, making it nearly impossible for food or medicine to get into the district and leaving thousands of patients in need of treatment.

According to UN officials, hundreds of thousands of people have been killed in the conflict to date.