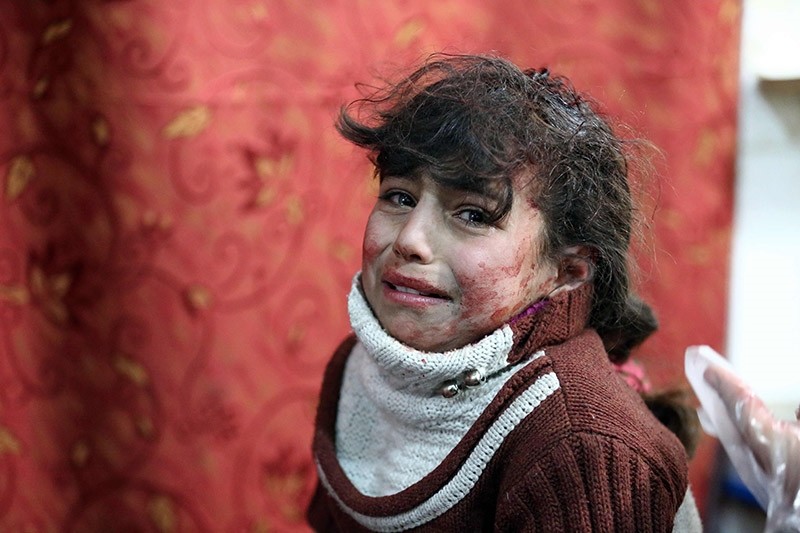 Hala, 9, receives treatment at a makeshift hospital following Syrian government bombardments on rebel-held town of Saqba, in the besieged Eastern Ghouta region on the outskirts of the capital Damascus on February 22, 2018. (AFP Photo)
by Mar 02, 2018 12:00 am

The United Nations Human Rights Council has agreed to hold an emergency session Friday on the crisis in Syria's besieged opposition enclave of eastern Ghouta, following a British request.

The "urgent debate" on a resolution proposed by Britain is scheduled to open at 3 p.m. (1400 GMT), a spokesman for the Geneva-based council, Rolando Gomez, said in a statement.

The British draft reiterates calls for immediate humanitarian access to eastern Ghouta, where a controversial truce unilaterally declared by Damascus-ally Russia has failed to produce a breakthrough.

The draft resolution also calls on war crimes investigators from the U.N.-backed Commission of Inquiry for Syria to conduct an investigation into alleged atrocities in the area.

Russia does not currently hold a seat on the rights council -- which has 47 members rotating on three-year terms -- but it could muster its allies to push back against the British proposal.

The British draft also calls for the full and immediate implementation of Security Council resolution passed last weekend which foresees a 30-day ceasefire across Syria that has so far not been put into effect.