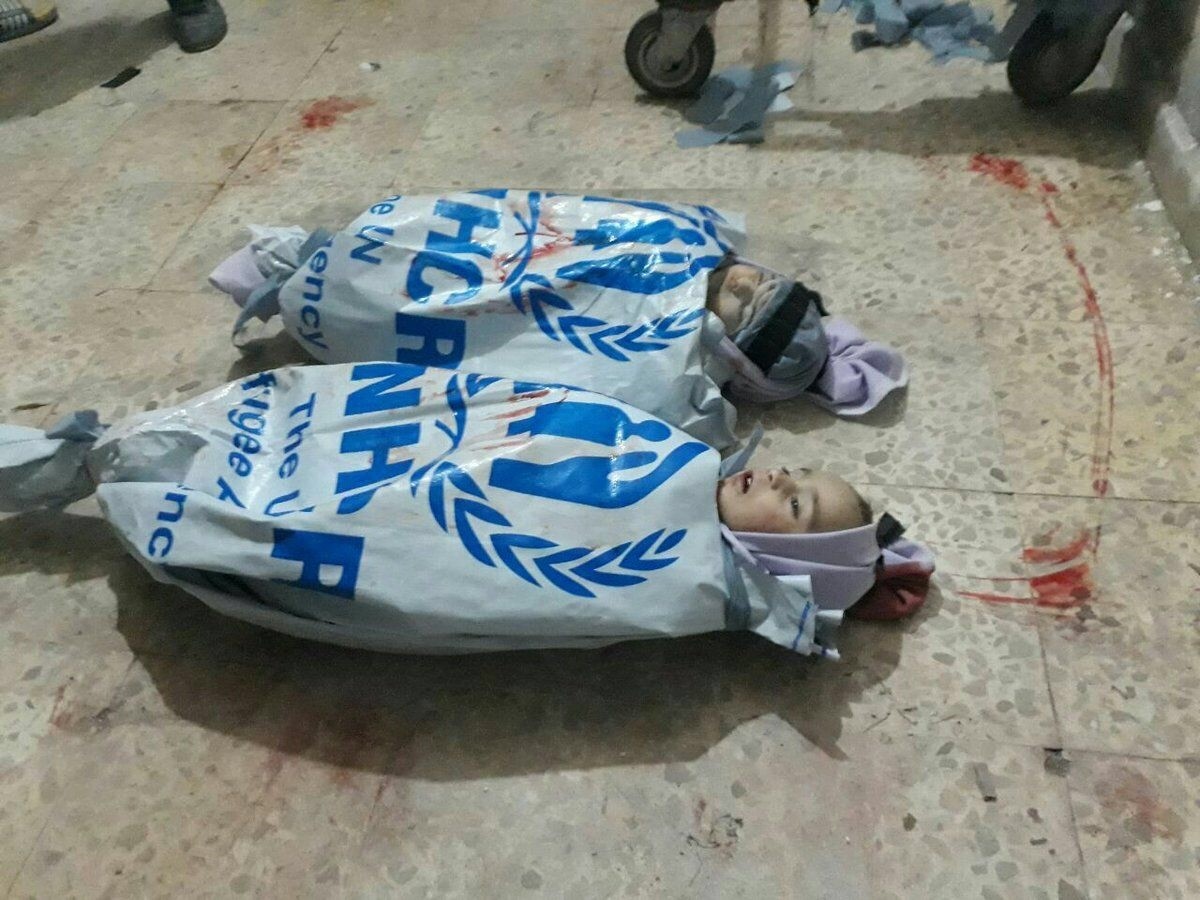 Syrians in the besieged eastern Ghouta on the edge of Damascus have begun using U.N aid bags as shrouds for children killed in the devastating bombardment by the Assad regime, to express their frustration over the organization's inaction.

Syrian activists shared a video of the bodies of two children as young as two years old lying on the ground wrapped in bags with the U.N. Refugee Agency logo on them after the agency failed to send an aid convoy inside the region, having been denied permission from the regime.

Many Syrians took to social media to voice their anger over the lack of action to help eastern Ghouta's 400,000 residents who have lived under the regime siege since 2013 and are facing severe shortages in food and medicine.

Eastern #Ghouta parents send a clear message to the @UN after their children were killed by Assad and his allies...have you received the message, #UN ?! pic.twitter.com/nvQG3j1Hy4

This is the only useful thing the civilians in #Ghouta got it from the @UN pic.twitter.com/kVdGPhPNh8

This is the only thing that the United Nations @un has been able to offer to the civilians trapped in the eastern Ghouta after 15 days of the genocide they are subjected to! pic.twitter.com/MPIcjHCOFj

An AFP correspondent inside eastern Ghouta saw hundreds of civilians on Sunday fleeing from the town of Beit Sawa in the southeast of the enclave.

The Observatory said some 2,000 civilians had fled regime shelling and clashes in eastern areas to western parts of the enclave.

"Everyone is on the road. There's destruction everywhere," said 35-year-old Abu Khalil, carrying a little girl in his arms wounded on the cheek.

On Saturday, 18 civilians, including three children, were killed in regime bombardment of eastern Ghouta, according to the Observatory.

At least 76 pro-regime fighters and 43 opposition fighters from Jaish al-Islam have also been killed in clashes since Feb. 25, it says.

Meanwhile, late Sunday, President Bashar al-Assad said the operation in eastern Ghouta must continue. He said there was no contradiction between a truce and the ongoing combat operations, adding that the operation should continue in parallel with efforts to open a way for civilians to leave the region.

Assad also accused the West of creating a "ridiculous lie" about the humanitarian situation in the country. He claimed Western accusations about the use of chemical weapons were an excuse to attack the Syrian army.

Encircled by regime-controlled territory and unable or unwilling to flee, eastern Ghouta's 400,000 residents have in recent weeks suffered one of the most ferocious assaults of Syria's civil war.

Under siege since 2013, they had already been facing severe shortages of food and medicine. The region's over-burdened medical workers have been struggling to cope with the rising number of wounded.

While falling short of a 30-day ceasefire demanded by the United Nations, Russia's announcement of daily humanitarian pauses in fighting had raised hopes of some aid deliveries and evacuations.

A convoy of "46 truckloads of health and nutrition supplies, along with food for 27,500 people in need" would finally enter the battered enclave on Monday, the U.N. Office for the Coordination of Humanitarian Affairs said.

The OCHA said further deliveries would follow and that it had "approval" to help 70,000 needy residents. However, the reports later on said the regime did not grant the necessary approval for the convoy to enter the enclave.