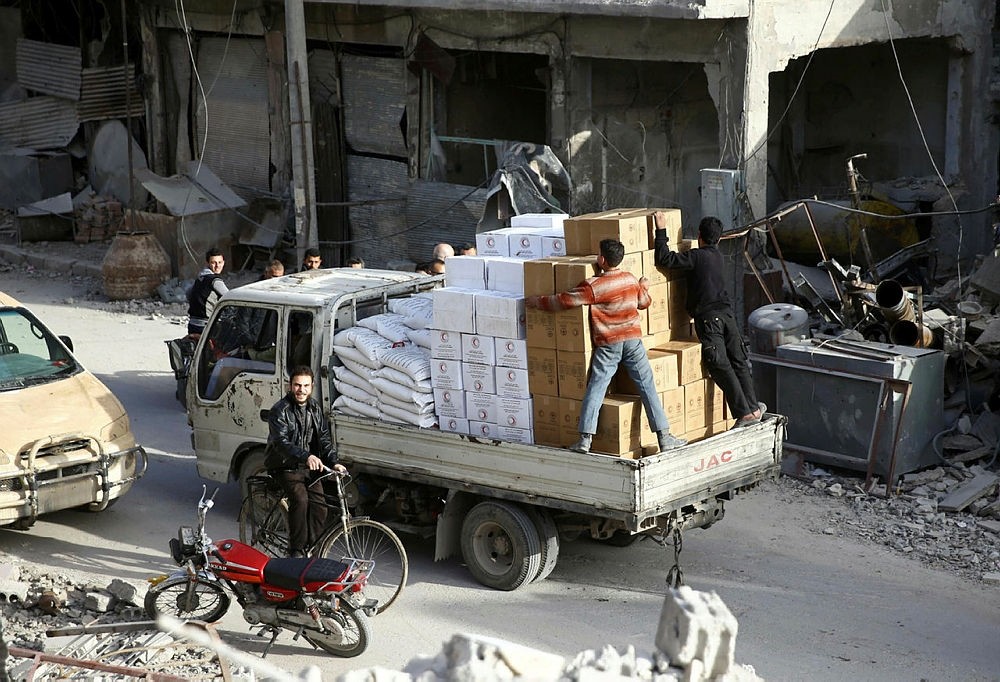 An international convoy cut short its mission to Syria's opposition enclave of Eastern Ghouta on Monday after delivering desperately needed aid as the regime pounded the region, killing dozens as it seized more ground.

At least 68 civilians were killed Monday, a monitor said, while the United Nations reported dozens of trucks carrying aid had reached the main town of Douma.

The regime removed medical supplies from the first aid convoy to arrive since the start two weeks ago of a bloody Russian-backed assault that has sparked outrage but little action from the West.

The 46 aid trucks arrived after fresh air strikes hit the shrinking opposition-held zone and regime troops rapidly advanced, leaving them in control of 40 percent of the region.

An AFP reporter in Douma said warplanes were flying overhead and explosions from could be heard even as the aid was being unloaded.

The UN's refugee agency UNHCR said the aid convoy had been in the town of Douma for nearly nine hours.

But on Monday evening it cut short its mission and left the enclave, the UN said.

"We delivered as much as we could amidst shelling," UNHCR's Syria representative Sajjad Malik tweeted. "Civilians are caught in a tragic situation."

Linda Tom, spokesperson for the UN's humanitarian coordination office OCHA in Syria, told AFP fighting and air strikes had continued during the convoy's deploment, "including on Douma city while the convoy was offloading".

More than two weeks of air strikes, artillery and rocket fire on the last major rebel-held enclave near Damascus have killed hundreds and devastated towns.

At least 19 people were killed in the town of Hammuriyeh, said the Syrian Observatory for Human Rights.

Another 49 died elsewhere in the enclave, it added, bringing to around 760 the number of civilians killed since the assault began, including at least 170 children.

At least 15 civilians were killed and 70 wounded in strikes "believed to be Russian" on the town of Kafr Batna, said the Britain-based monitor, which relies on a network of sources inside Syria.

The UN Human Rights Council on Monday ordered investigators to examine the latest violence and condemned "the indiscriminate use of heavy weapons and aerial bombardments against civilians, and the alleged use of chemical weapons in Eastern Ghouta".

Regime troops and allied forces have advanced rapidly across farmland in the east of the enclave in recent days, the Observatory said.

By Monday evening they had retaken 40 percent of the enclave, it added.

Armed groups there, one of them made up of fighters from Al-Qaeda's ex-affiliate, have been firing mortar rounds and rockets on adjacent neighbourhoods of Damascus, killing around 20 civilians in two weeks.

The offensive has sent hundreds of civilians fleeing from their homes away from the moving front line, compounding a humanitarian crisis and echoing the regime's devastating 2016 assault to retake second city Aleppo.

Monday's convoy was delivering "health and nutrition supplies, along with food for 27,500 people in need," OCHA said.

But the UN and aid groups said the Syrian government had blocked medical supplies from entering.

Save the Children said the regime had removed surgical kits and insulin, exacerbating the acute lack of medical care in the enclave.

"Doctors say they have to reuse bandages and needles on multiple patients as there simply aren't enough to go round," it said.

"Some 400,000 innocent civilians are trapped with no food, water or medicine. They must be protected," said Sonia Khush, the group's Syria director.

"The items (removed) included trauma kits and other life-saving supplies," Linda Tom told AFP, calling for a solution ahead of a planned Thursday aid delivery.

The United States on Sunday condemned the assault, accusing Moscow of killing "innocent civilians" and ignoring a UN resolution calling for a 30-day cessation of hostilities.

Moscow has offered safe passage to non-combatants wishing to leave Eastern Ghouta during daily "humanitarian pauses", but the UN and the Observatory say no Syrian civilians have left the enclave since the first break in fighting took effect last week.

Damascus and Moscow have accused rebels of preventing civilians from leaving in order to use them as human shields.

In remarks broadcast on state television on Sunday, Syrian President Bashar al-Assad said his forces would push on.

"The majority (of people) in Eastern Ghouta want to escape the embrace of terrorism. The operation must continue," he said.

Observers have said advances on the ground might spark fresh efforts to negotiate an evacuation to Idlib, a northern province now hosting defeated anti-regime forces from across Syria.

The rebels "saw what happened in Aleppo, they don't stand a chance," said Fabrice Balanche, a visiting fellow at Stanford University's Hoover Institution. "I doubt they can hold out several months."