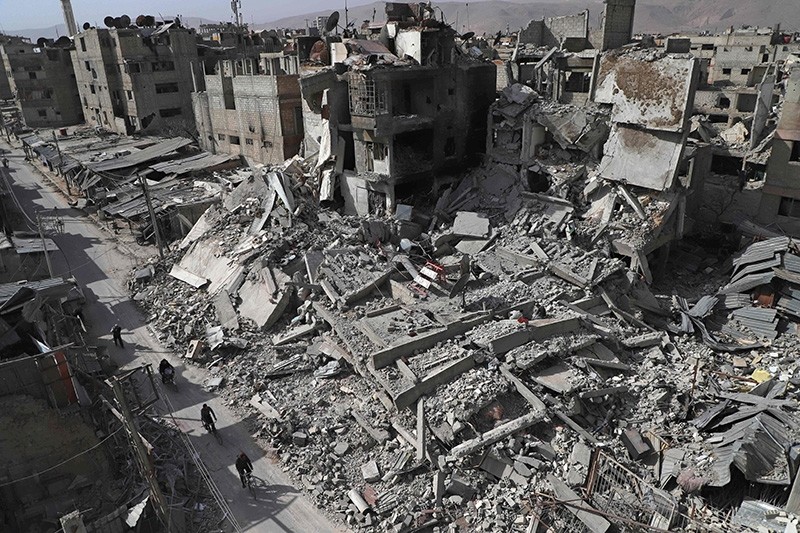 A general view shows several destroyed buildings in Douma, in the opposition enclave of eastern Ghouta on the outskirts of Damascus (AFP Photo)
by Mar 06, 2018 12:00 am

More than 780 civilians -- including 170 children -- have been killed since Russia-backed regime forces launched an assault on the besieged enclave outside Damascus on Feb. 18.

The brutal onslaught on the last major opposition stronghold near the capital, the latest regime offensive of the seven-year civil war, has sparked outrage but little action from the West.

Regime troops have advanced rapidly across farmland in eastern Ghouta in the past week, a monitor says, and as of early Tuesday controlled 40 percent of the enclave, the Syrian Observatory for Human Rights said.

Essential aid deliveries to tens of thousands of besieged civilians were cut short Monday as the regime pounded the region.

At least nine civilians were killed in airstrikes on the town of Jisreen early Tuesday, the Britain-based Observatory said.

In the enclave's main town of Douma, airstrikes had reduced homes to piles of rubble on both sides of the road, an AFP correspondent reported.

Some civilians took advantage of a lull in airstrikes to venture out from cellars to gather a few necessities from what was left of their homes.

Others gathered the pieces of home furniture smashed in the raids to use as fuel or sell to others.

At a hospital in the town, medical staff scrambled to help the wounded. Some had lost relatives in the raids. Parents held their children close, trying to comfort them.

An AFP reporter in Hammuriyeh said airstrikes had hit the town overnight and only a few residents emerged from their cellars after daybreak for fear of more.

Late Monday, the Observatory reported 18 people suffered breathing difficulties following a strike on Hammuriyeh. It had no firm word on the cause.

The U.N. Human Rights Council Monday ordered investigators to examine the latest violence in the enclave.

It condemned "the indiscriminate use of heavy weapons and aerial bombardments against civilians, and the alleged use of chemical weapons in eastern Ghouta."

The enclave's 400,000 residents have lived under siege since 2013, facing severe shortages of food and medicines even before the latest onslaught.

Forty-six aid trucks entered eastern Ghouta Monday for the first time since the offensive started, but had to cut short their deliveries and leave due to heavy bombardment.

"The people we've met here have been through unimaginable things. They looked exhausted," Pawel Krzysiek of the International Committee of the Red Cross said afterward.

"And the aid we've delivered today is by no means enough," he said on Twitter.

Regime ally Russia last week announced a five-hour daily "humanitarian pause" in eastern Ghouta, during which it said it would guarantee safe passage to civilians wishing to flee the enclave.

But no Syrian civilians are known to have left since Tuesday last week.

More than 340,000 people have been killed and millions displaced in Syria since the start of the civil war in 2011 with the brutal repression of anti-government protests.

Over the years, numerous rounds of U.N.-backed Syria peace talks have failed to stem the fighting.

In the latest attempt to end the seven-year war, the foreign ministers of regime allies Iran and Russia and opposition backer Turkey are to meet next week in Astana, Kazakhstan's top diplomatic envoy said Tuesday.