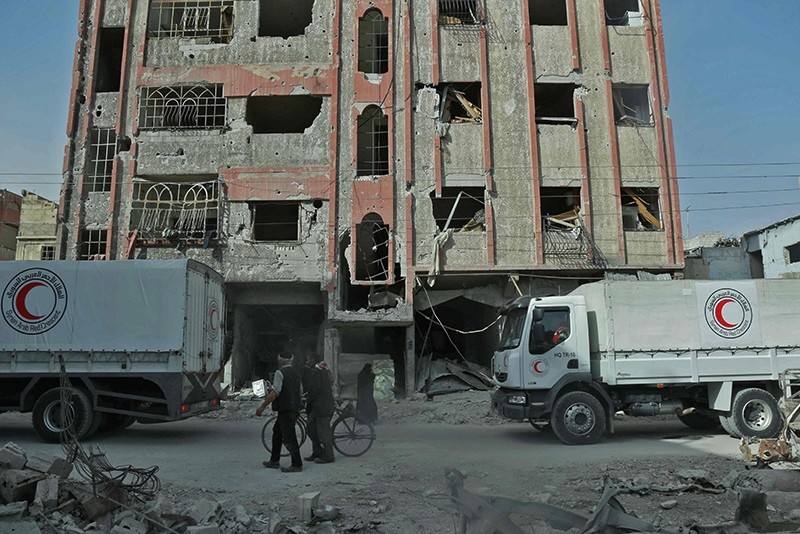 A convoy of Syrian Red Crescent trucks arrives in Douma in the Syrian opposition-held enclave of eastern Ghouta on the outskirts of Damascus, Syria, March 5, 2018. (AFP Photo)
by Compiled from Wire Services Mar 08, 2018 12:00 am

The International Committee of the Red Cross on Thursday said a second convoy that was supposed to carry aid to the besieged opposition-held eastern suburbs of Damascus has been postponed because of the violence.

Ingy Sedky, the ICRC spokeswoman in Syria, said "convoy is postponed. No confirmation yet on when it will take place."

The postponement came as the Assad regime forces intensified their offensive on the area, known as eastern Ghouta, under the cover of airstrikes.

Sedky added that "the situation is evolving rapidly on the ground, which doesn't allow us to carry out the operation in such conditions."

The joint convoy between the ICRC, the United Nations, and the Syrian Arab Red Crescent was expected to deliver aid to eastern Ghouta's main town of Douma. 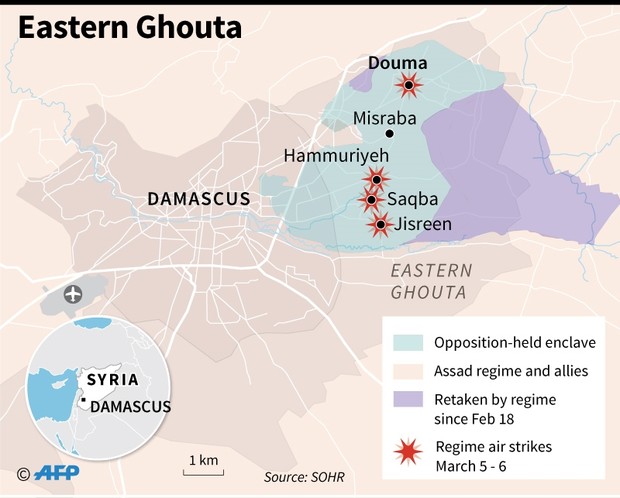 Meanwhile, French Foreign Minister Jean-Yves Le Drian urged Russia and Iran to use their influence over the Assad regime to ensure it respects a U.N. resolution calling for a 30-day cease-fire.

Le Drian also reiterated that France will respond if it is proven chemical weapons have been used and killed people.

French President Emmanuel Macron and his government have in recent weeks repeatedly called for a truce in Syria to allow the delivery of humanitarian aid to trapped civilians, but the fighting continues.

Earlier this week, the first convoy in weeks made it into eastern Ghouta, but 14 of the 46 trucks were not able to fully offload critical humanitarian supplies because of stepped-up violence.

Eastern Ghouta has been besieged since 2013, making food, medicine, and other daily goods exceedingly difficult to access.

Aid deliveries into the area require permissions from all warring sides.