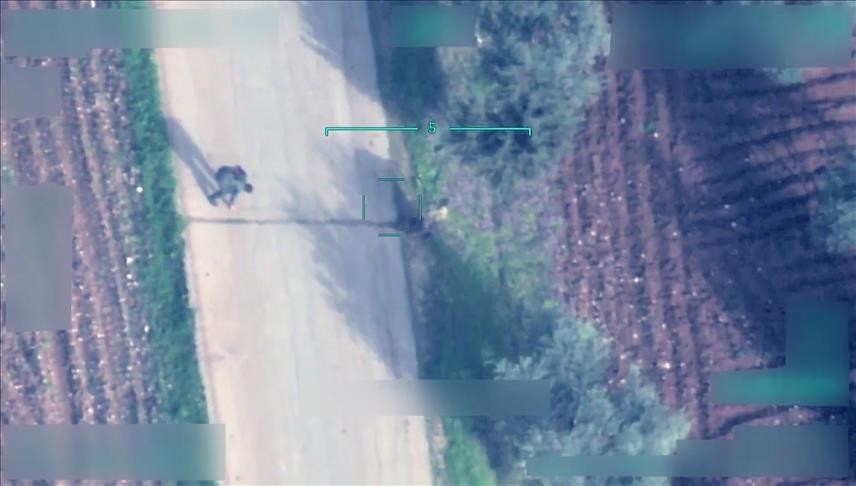 Scores of people were killed after a truck carrying civilians in northwestern Syria's Afrin region passed over mines planted by People's Protection Units (YPG) terrorists in a bid to prevent civilians from fleeing the region, a video shot by an unmanned aerial vehicle (UAV) of the Turkish Armed Forces (TSK) showed Thursday.

A video which has captured the moment of the incident shows the civilians in a truck coming under attack by the PKK's Syrian affiliate, leaving a 3-month-old baby and two children dead.


As the drone footage reached the Turkish Armed Forces headquarters, Turkish warplanes took off and neutralized the terrorists.

As the YPG terrorists succumb to their wounds, a truck carrying civilians is seen, which later crashes into the mines set up by the PKK's Syrian affiliate.

As the mines explode, civilians try to escape, some of whom step on other IEDs in the area, sparking more explosions.

Anti-personnel mines were outlawed worldwide with the Ottawa Treaty, which was opened for signature on Dec. 3, 1997.

Mohammed Nour Alo, one of the civilians who survived the attack, told reporters that the truck was carrying 36 people who wanted to reach Ramadiyah village as a safer location.

"Most of the people on the truck were women and children. Two of my sons and daughter were martyred. They hid the mines near the highway. My daughter was a 3-month-old baby," he said.

A day after the PKK's attack against civilians, the village of Kurayriyah, where the incident unfolded, was liberated by the Turkish Armed Forces and the Free Syrian Army.

Earlier last week, U.N. Undersecretary-General for Humanitarian Affairs and Emergency Relief Coordinator Mark Lowcock said civilians who wanted to flee Afrin continue to be stopped at exit points and were being prevented from accessing safer areas by YPG/PKK terrorists.

Also, the spokesperson for United Nations Secretary-General Stéphane Dujarric said Monday the YPG was blocking civilians from leaving Afrin. "What I can tell you is that just over 5,000 people have exited Afrin, but we understand that local authorities are still blocking anyone from exiting the district," he said.

Civilians refer to the Democratic Union Party (PYD) and YPG as the local authorities. The group has reportedly been using civilians as human shields since Turkey began its operation in Afrin. The militants dress as civilians to blend in with the locals, and hence avoid being attacked by Turkish and Free Syrian Army (FSA) forces. They also take positions in residential areas to make it look like the Turkish and the Free Syrian Army forces are attacking civilians.

Since the launch of Operation Olive Branch on Jan. 20, the Turkish military and the FSA have liberated 157 locations, including five town centers, 122 villages, 30 strategic areas and one YPG/PKK base.

According to the Turkish General Staff, the operation aims to establish security and stability along the Turkish-Syrian border and in the region, as well as to protect the Syrian people from the oppression and cruelty of terrorists.

Turkey is carrying out the operation as it exercises its right of self-defense within the jurisdictions of international law, U.N. Security Council resolutions and the U.N. charter, with full respect for Syria's territorial integrity.