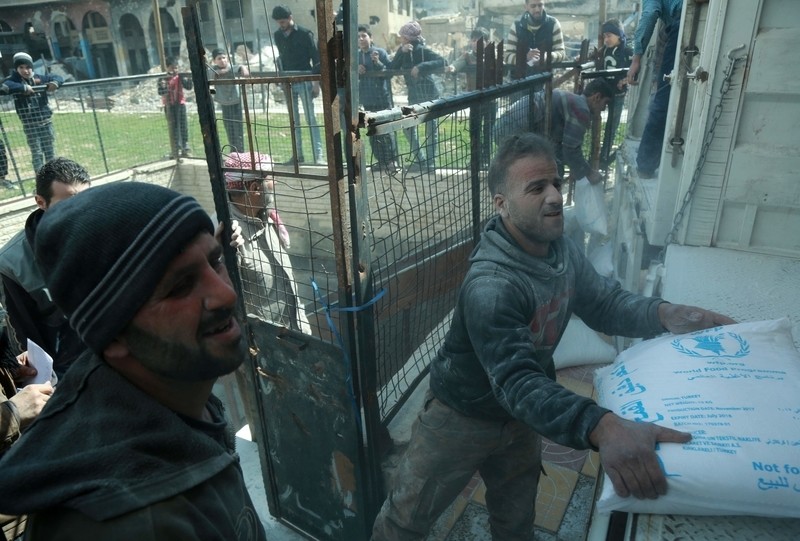 Humanitarian aid is being distributed in the Syrian opposition-held enclave of eastern Ghouta on the eastern outskirts of the capital Damascus in Douma, Syria, March 9, 2018. (AFP Photo)
by Daily Sabah with Wires Mar 09, 2018 12:00 am

An aid convoy into Syria's eastern Ghouta on Friday unloaded all its aid in the opposition-held area's main town of Douma and crossed back into Assad regime-held territory, the International Committee of the Red Cross (ICRC) in Syria told Reuters.

The convoy consisted of 13 trucks of food supplies that could not be delivered on Monday, when an earlier convoy halted its delivery and left because of ongoing fighting.

Earlier Friday, U.N. resident coordinator Ali Al-Za'tari said shelling near Douma was putting an aid convoy at risk, "despite assurances of safety from parties including the Russian Federation."

The aid convoy crossed the frontline into the besieged enclave Friday and was headed to the town of Douma, ICRC said, amid the first pause in airstrikes since launching a massive ground assault against opposition-held eastern Ghouta.

"They are in," ICRC spokeswoman Ingy Sedky said of the 13 trucks loaded with 2,400 food parcels that had been waiting outside the enclave east of Damascus after the interruption of Monday's delivery.

In less than two weeks, the Syrian army has recaptured nearly all the farmland in eastern Ghouta under cover of near-ceaseless shelling and air strikes, leaving only a dense sprawl of towns - about half the enclave - still under rebel control.

The attack has killed more than 1,000 people, the medical charity Medicins Sans Frontieres (MSF) said Thursday. The war monitor, the Syrian Observatory for Human Rights, on Friday gave a death toll of 931 civilians in the campaign.

"The situation is relatively good today. The bombing eased for a bit and is no longer intense," said Bilal Abu Salah, a resident of eastern Ghouta's biggest town, Douma. But he added that shortages are still acute, causing great hardship. "Entire families eat one meal in several days," he said.

U.N. aid agencies have pleaded with the Syrian government and its ally Russia to halt the campaign and allow access to bring in aid after a convoy on Monday was unable to complete its delivery because of the fighting.