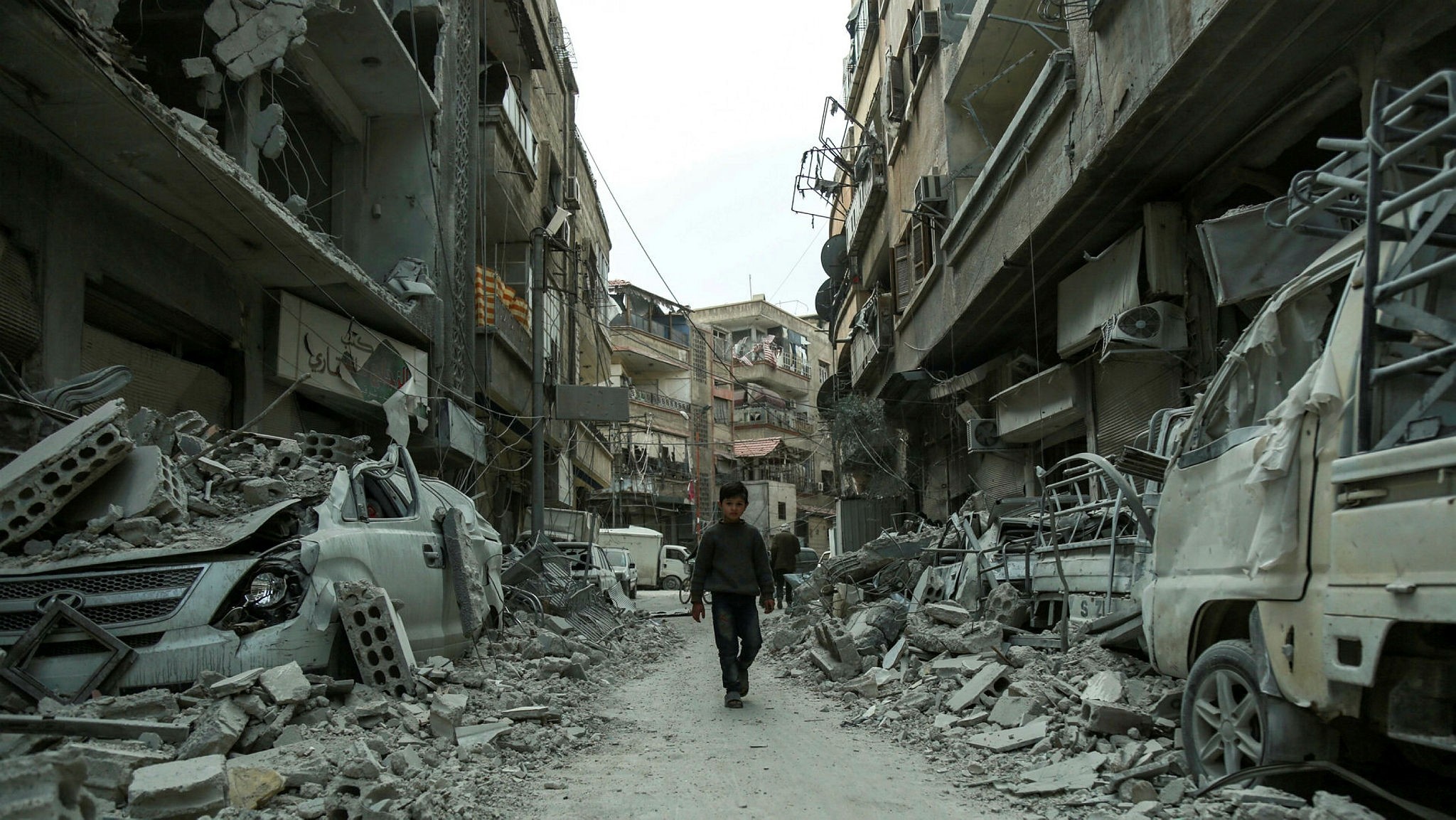 A Syrian child walks down a street in the opposition-held town of Douma, Eastern Ghouta, March 8.
by Yusuf Selman İnanç Mar 10, 2018 12:00 am

The prevention of the delivery of medical supplies and the nonstop airstrikes on Eastern Ghouta, even after aid convoys reached the town, have once again refuted claims that the regime and its backers only target the insurgents

The regime forces, along with the Russian air forces and Iranian-backed proxy groups, continue their assaults on Eastern Ghouta, a densely populated town, near Damascus, home to 400,000 people. In the recent attacks more than 1,000 people were killed in order for the regime and its main backers, namely Russia and Iran seem determined to erase the presence of the opposition. Yet, while doing so, the most effected ones are the civilians who suffer from the year's long siege as well as the blockade of aid deliveries.

Although the regime had declared its compliance for the aid deliveries of the international organizations, the renewed clashes and airstrikes have stultified the efforts. Moreover, the regime has been stripping the convoys of medical equipment, which are terribly needed in the town where almost all of the medical facilities have been either totally ruined or compelled to operate under minimum conditions. Doctors Without Borders said, "the need for a massive medical resupply, without life-saving items being removed, is increasingly urgent with each passing hour. … The numbers reveal a relentless barrage of mass casualty influxes at a time when medical supplies are extremely limited, medical facilities have been hit by bombs or shells, and the medics are completely exhausted. Daily, we hear of an increasing sense of hopelessness and despair, as our medical colleagues reach the limits of what a person can be expected to do."

Besides, the civil defense units are prevented from doing their jobs so that the corpses under the rubbles are not reachable. Therefore, the actual death toll is unknown. "In less than two weeks, the Syrian army has retaken nearly all the farmland in Eastern Ghouta under cover of near ceaseless shelling and airstrikes, leaving only a dense sprawl of towns - about half the territory - still under insurgent control. The onslaught has killed more than 1,000 people, the medical charity MSF said on Thursday. The war monitor, the Syrian Observatory for Human Rights, on Friday gave a death toll of 931 civilians in the campaign. For Eastern Ghouta's civilians, trapped in underground shelters but deprived of food and water, there is a constant dilemma – whether to seek supplies or stay inside," Reuters reported Friday. The same report quoted a Ghouta resident saying that "People were hopeful after the bombardment decreased and went out onto the streets. But then airstrikes began again, and there are still people under the rubble that we couldn't get out."

A Red Cross convoy reached to the enclave, yet the aerial strikes started again after an overnight pause. Although International Committee of the Red Cross (ICRC) spokeswoman Indy Sedky said the trucks crossed into Eastern Ghouta Friday "after getting security guarantees from all parties to make sure no incident will happen during the presence of our team" there, immediately after the convoy entered the town, the airstrikes began again, shelling civilians who gathered to receive the aid. "The Syrian Observatory for Human Rights reported airstrikes on Douma and Jisreen just before the 13-truck convoy arrived Friday, following a several-hour lull. It said the lull was result of local negotiations brokered by unnamed Damascus businessmen with the government to try and reach a solution that would secure the exit of fighters and civilians from Eastern Ghouta," an Associated Press (AP) statement said. "A Douma resident, in a voice message in which the sounds of loud explosions were audible, said four jets were in the sky and residential areas had come under an on air attack. The food parcels were supposed to be delivered Monday when another aid convoy entered Douma, but the fighting and bombardment then forced it to leave early without unloading all its supplies," the Reuters report continued. A resident told Reuters that entire families only ate one meal in several days.