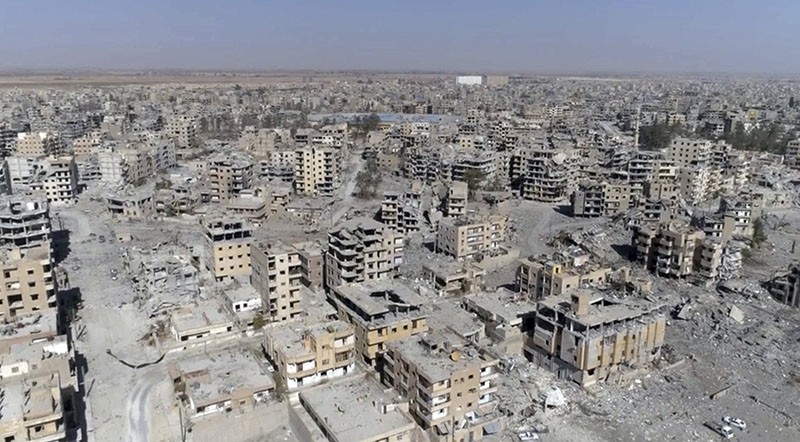 This Thursday, Oct. 19, 2017 frame grab made from drone video shows damaged buildings in Raqqa, Syria, two days after SDF said that military operations to oust the Daesh group have ended. (AP Photo)
by Daily Sabah with AFP Mar 15, 2018 12:00 am

A prominent lawyer involved in a deal that saw some Daesh terrorists given safe passage out of their Syrian bastion Raqqa last year was found dead on Thursday, local authorities currently running the city said.

Omar Alloush helped negotiate an agreement with tribal leaders that allowed some Daesh fighters to leave Raqqa before it was overrun by the U.S.-backed Syrian Democratic Forces (SDF) on October 17.

He was a senior member of the Raqqa Civil Council (RCC), a provisional administration for the city set up by the SDF.

The Democratic Union Party (PYD), the Syrian offshoot of the PKK terrorist group whose armed People's Protection Units (YPG) wing dominates the SDF and one-thirds of Syrian territory, gave no details of the circumstances of Alloush's death.

"Omar Alloush was found dead at his home this morning," the PYD said on Twitter.

The SDF captured Raqqa after a months-long campaign in October 2017 that saw them thrust south from their northern stronghold along the Turkish border with support from U.S.-led air strikes and ground advisers.

Alloush served both as a publicist for the SDF and as a liaison officer with the U.S.-led coalition.

Former SDF high-ranking commander and spokesperson Talal Sillo, who held a similar position to those of Alloush before he went on to become a member of the RCC, defected from the terrorist group in November and arrived in Turkey, saying he fears to be executed by the group.

The secret deal between the SDF and Daesh, which reportedly allowed thousands of Daesh fighters and their families to leave their enclave in Raqqa for undisclosed locations under SDF control, angered almost every party that is involved in the 7 year-long Syrian Civil War, including U.S. allies in the anti-Daesh coalition.